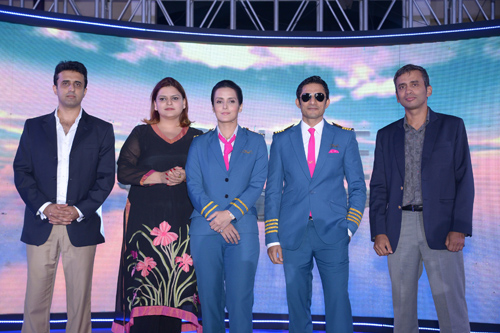 New India, a country of youth. A country which is seeing the emergence of the young woman. The woman who walks boldly down the road less traveled and lives her dream. No longer restricted by the traditional â€œfemale onlyâ€ professions, the new age Indian woman is challenging and making her mark in stronghold male bastions. The finest example of this is the Aviation industry where till recently, women were air hostesses and the coveted pilots of the aircraft were men. Breaking this stereotype Star Plus is all set to launch Airlines - Har Udaan Ek Toofan. The story of Flight Officer Ananya Rawat forms the central theme for Airlines, as she personifies the aspirations and ambitions for most young Indian women.

Set in Delhi, the show features the journey of First Officer Ananya Rawat who navigates through a world of gender discrimination and regressive attitudes embedded in the modern and glamorous aviation industry. In her quest to establish her identity, Ananya realises that there is more to this industry than just battling male attitudes as she comes across many hindrances that eventually make her a stronger person. A fast paced thriller, each episode poses a fresh challenge and promises to take viewers into Ananyaâ€™s new world of adventure, action, intrigue and drama.

The show marks the TV debut of Tulip Joshi who plays Ananya and VJ turned actor Yudishthir aka Yudi essaying the role of Captain Akash. It is produced by Miditech and has been written by Advaita Kala, who also authored the recent sleeper hit Kahaani.

From roping real pilots for tutoring actors to shooting at existing Terminals, Star Plus has put in its best to retain authenticity of the situations and incidents covered in the show. Since most of the sequences require the setting to be inside an aircraft, a special set modelled on Boeing 370 has been created. Miditech has also collaborated with Pixion to help recreate the world in the skies with its unparalleled proficiency in computer graphics and visual effects.

Mr. Nikhil Madhok, Sr. VP Marketing & Programming Strategy says, â€œThe aviation industry has conventionally been seen to be male-dominated. The only visible position occupied so far by women has been as Air Hostesses. Our new show Airlines, challenges this stereotype with a brave new protagonist Ananya Rawat, who is her airlineâ€™s first female pilot recruit. This show has a completely new backdrop and new narrative style, which we feel will connect with young women across the country. We hope that Ananyaâ€™s journey will inspire more young women to challenge stereotypical thinking and give wings to their dreamsâ€.

Mr. Nikhil Alva, Creative Head-Miditech says, â€œWith Airlines, the story of the most coveted, the most dangerous and the most glamorous profession of them all - the Aviation industry come to life. It  will mark the Bravery and the magnanimous attitude of a women pilot in the aviation industry. The production house has not only shot exclusively against a glamorous background, but has also roped in real life pilots to tutor the actors.â€

ttrocks 6 years ago Nice show with nice concept. Thanks Star Plus for this refreshing show. Now can tune in to TV on Sunday night o.w. there's really nothing to watch among the circus of so-called "Reality" and "Talent hunt" types shows.

pinkpearl5 6 years ago I'm definately going to watch this show. It's very different and unique for Indian Television. Plus I absolutely love learning about aviation! A perfect show for me! &lt;3

minaalM 9 years ago the guy is tooo young for her,
C'mon Anushka try some one else he is a kido i guess,
+ you should just focus on your career first.

You are a great actress BAND BAJA BARAT had prove that.

noseasync 9 years ago she should focus on her career instead of wasting her time in these useless things!

Nahla11 9 years ago She is dating who? My friend Sofiyah Ahmed from Walthamstow says she has good skin

..ayaan.. 9 years ago considering the fact that ranveer has became way too bratty these days, it wld be better if anushka moves on with someone:)