View Profile
‘Fashion’ is the biggest project of director Madhur Bhandarkar. The director likes to weave stories around a specific section of society every time. Bhandarkar sets his sights on exploring the glamorous world of fashion, in a movie 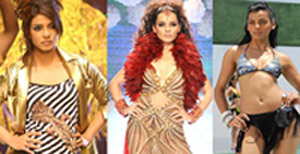 Featured Video
titled just that. . The film has been mounted on a lavish scale and even sees Salim-Sulaiman coming on board as composers while replacing Shamir Tandon with whom Bhandarkar has worked in quite a few projects. Well the music for the movie is out and its not just based on theme but it has got many other genre to offer apart from fashion.

So let’s check it out!

The music album opens with the title song ‘Fashion ka Jalwa’ sung passionately by energy box Sukhwinder Singh along with Satya Hinduja and Robert. It’s a high beat number with western arrangement attached to it in form of electrifying guitar along with rap. Sandeep Nath’s peculiar lyrics on fashion world are catchy and impressive. Salim –Sulaiman music is a great joy to all listeners. It is a chartbuster material in every sense. It’s not something that you would love to croon but will be able to recollect it in discotheques, pubs and parties where this number has already ga

Salim Merchant’s back up rendition adds more to the flow of the song.

The creatively penned lyrics by Irfan Siddhique and a breezy composition by Salim-Sulaiman caress your ears and soul both. The remix version may get on music buffs but the original version is the best. This song will make you fall in love completely.

A soft rock number ‘Aashiyana’ is the third track. This is a best club number appropriate with the theme of fashion. Lyrics are about carefree youth, babes and dudes trying their luck in fashion industry. Salim Merchant solely sings the song. The remix is eng

ineered by DJ Amith that is surely going to thrill everyone on the dance floor of nightclubs, parties. This song is right blend of mild beats which surely going to capture your attention.

If you are, not out of ‘Mar Jawan’ here is another melodious number ‘Kuchh Khaas’ by fantabulous voices Mohit Chauhan and Neha Bhasin. A romantic number with mild feel of rhythmic guitar chords throughout. The remix version provides you with a contemporary urban feel and sounds peppy. Lyrics will surely make you fall in love all over again.

The ‘Theme of fashion’ takes time to impress but after hearing, it for sometime you may probably like it. Too many music instruments used but the majority its Santoor played along with drums, violin and many more. Blended with female’s cordial echoing voice at end is impressive. Once again, a good work from Salim-Sulaiman. The remix by Karsh Kale and Medeival Punditz is very rocking. Wi

th very creatively arranged tunes, it begins to attract you the moment it starts playing and will urge you take a heed of it over times. In all it is a musical extravaganza.

On whole, the album works big with right kind of songs, music, and remixes.  Salim-Suleiman have done a wonderful job as composers and have brought out the essence of the movie in a remarkable way. Irfan has come out with great lyrics and every singer has given his or her best. Though Madhur’s ’Page 3’ did get success with respect to its music as well, Fashion has a potential to break the record. ’Fashion’ music album will loot the hearts in totality.