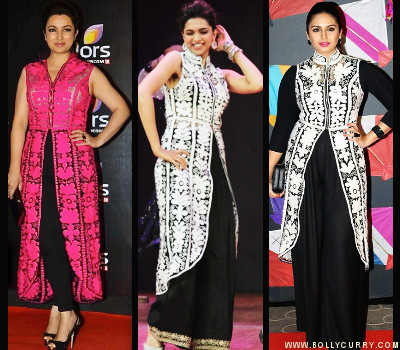 One more time among those few many others when Tinsel Town divas end up sporting same/similar costumes, albeit at different occasions. It's one chance like none other to compare, contrast and adjudge who really does look better. This time the Fashion Police have not two but three appearances of the same Pankaj and Nidhi embroidered jacket on three different actresses.

We first saw the vibrant jacket donned by the talented Huma Qureshi way back in the start of 2013 at a movie premiere. She matched it with plain black palazzo and a three quarter sleeved black shirt. Hair tied up neatly in a bun with studded earrings, a dark ring and some bangles worn as accessories while a massive clutch accompanied her along. It was not a head turning look, if we're totally honest.

A few months later, Deepika Padukone chose the same jacket as her attire at a promotional event for her film. She paired it with a pair of golden embroidered Sabyasachi bottoms and a pair of silver flat pumps. The contrasting blue and silver earrings added some nice glow to the look. Despite the clash of gold in the bottoms and white in the jacket, she looked stunning with her choice of accessories.

Recently, the jacket made another appearance, this time in pink color, on Tisca Chopra who was spotted wearing it at a leading GEC's party. She chose to wear the jacket sheer with no inner shirt and paired it with black leggings. Cleanly bunned-up hair, no accessories except one ring and a pair of black peep toes shoes completed her ensemble. She looked great but the top button undone on the jacket took away the gorgeous embroidery on the neck.

One jacket but three different styles to carry it off. While Qureshi went for the covered route with her shirt, Padukone and Chopra wore the jacket as it is. The accessories worn helped to polish the final look. As a whole, we'd say Padukone rocked her look the best with Chopra coming a close second. The golden embroidery of Padukone's palazzos clashed too much with the stark-white jacket whereas Chopra choosing to go with leggings was a wiser move. But going with top button undone docks her points. Qureshi, on the other hand, was just plain boring.

Agree? Disagree? Tell us all in your comments below.

Writer: Maisooma B.
Editors: Urooj K. and Jenifer Y.
Graphics: Marsh P
Do you have a suggestion or comment for BollyCurry? Drop us a PM at  BC_Dropbox today.
16 Likes