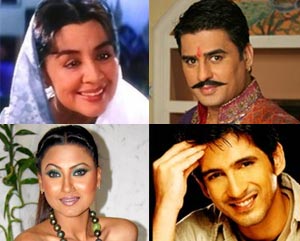 A lot of new independent producers are entering television these days. Recently a pilot of a serial was being shot secretly. Known actors like Nigar Z Khan, Ayub Khan and Sameer Sharma are reportedly part of the show. It is being produced by Dheeraj Kotkar of Golden Ticket Films who has previously produced films too under his banner. It's being directed by Waseem Sabir and written by Arshad Khan and Waseem Sabir.

The highlight of the serial is that veteran actress Farida Jalal too is a part of the show. She is known to be very choosy and picks up only selective good work on television. Hence we are waiting to see what this show is all about.

When contacted, the artists refused to comment on their roles and the storyline saying they have signed a non disclosure agreement. However Director of the show Waseem Sabir confirmed the news and even said "We cannot reveal the channel, the story or any details at this stage. But definitely things would be out for everyone to see very soon."

Let's wait and watch what this secretive show is all about!

13 years ago wow great news .. she is an amazingly talented actor with beautiful voice

i lov her in dt

+ 4
14 years ago wow cant wait to watch it! FINALLY this movie may PERHAPS be original LOL

14 years ago thanx!
really looking forward to this movie!