After Shreyas Talpade and Juhi Chawla, it is the turn of SRK's best buddy and Director Farah Khan to make her presence felt in Red Chillies Idiot Box show on NDTV Imagine, Ghar Ki Baat Hai… 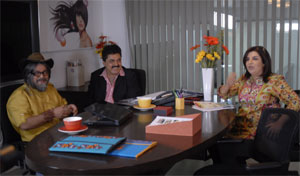 Featured Video
"She plays herself in the show like other celebrities, and will be seen as a Director. The only difference here is that she has come as a director in an ad agency", says Bhavana Sresth, Creative Director.

Elaborating on her role the creative director adds, "She is in the office to take the interview of Kaku (Swapnil Joshi). During the interview she gives him bit of gyan about ad film making".

Besides this, Ali Asgar is also donning a new avatar in the show. "He is playing the ad guru Prahlad Kakkar, and he sits with Farah and discusses about Kaku. It was real fun shooting with Farah", she chirps.

Talking about the celebrity cameos that have been a norm now in the show, Bhavana states, "There are many more to come in future episodes".

So let's watch the dhamaal episode with Farah Khan tickling the funny bones this Friday on Ghar Ki Baat Hai!!

13 years ago Awww..No guys
I love this showIt''s so funny
Just started in England and its absolutely hilarious
I love the fact the story revolves around very few characters..

+ 8
13 years ago lol SRK is tryin to get as many cameo''s as possible for this flop show!

+ 8
13 years ago @luv-rkb:If you don''t like Farah that doesn''t give you rights to use offensive words for her!!