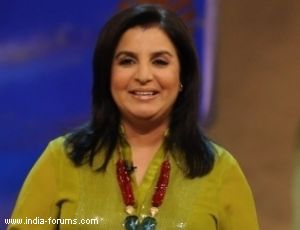 Choreographer-turned-director turned actress Farah Khan agreed to make her acting debut with "Shirin Farhad Ki Toh Nikal Padi" only once its makers agreed to remove a kissing scene from the script.

The movie, directed by Bela Sehgal, narrates the story of two 40-plus lovers. The kissing scene would have involved Farah and actor Boman Irani. But neither was Farah comfortable, nor did she think it was important.

"It was in the script, but when I saw the script, I asked them to remove it or else I (told them I) can't do it. Afterwards, I didn't want to have argument on the sets. So they removed it and it was not important," Farah said here.

Since Farah is a film director too, how does she tackle her actresses when they refuse any particular scenes?

"Either you say 'It is very important for my movie, so you have to wear these clothes for me and if you can't wear it, darling, I will take someone else.' Or say 'It is not important, I want you only and get it removed.' It is better to be open rather than getting negative energy on the sets later," said the 47-year-old.