Hats Off Productions, the makers of Star Plus’ show Baa Bahu Aur Baby has received innumerable mails and SMSes from loyal viewers of the show requesting them to air the show thrice a week as per schedule, and not to make any changes.

We talked to J.D. Majethia who explained the scenario. “The show which was aired on Friday, Saturday and Sunday at the 9.30 pm slot has now been cut short by half an hour on Fridays because of Nach Baliye. Also, in the coming weeks there will be more disturbances seen as Sunday’s episode will not be aired, with the award functions coming up on the channel”

It is heard that the production house has talked to the channel regarding this. “The channel has told us that this problem will be resolved by January end and they will see to it that there will be no further disruptions in the time slot of the show. The viewers will see three episodes of Baa Bahu Aur Baby every week, come what may!!”, verbalizes JD.

This show is undoubtedly the favorite of viewers, and we hope it stays this way for long!! 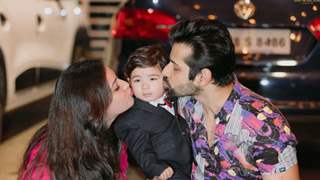 realityshows!! 12 years ago I agree with ArmaansGirl & tsaian ; such shows should be aired daily and HATS OFF group has serials especially BBB that can b seen by children otherwise the Balaji serials r always not meant for children .So I say Hats off to Hats off productions & plz dont change the timings as they will b losing their viewers.

+ 2
12 years ago Who cares about NB4. What are their TRP''s. More than BBB !!! that Star Plus channel gives priority to dance & award shows over BBB. We want BBB everyday (7 days a week)

+ 3
12 years ago BBB is the most realistic and cute show, its the best show on air today!!!

+ 5
12 years ago i love bbb..its something ppl can relate too plus it don''t have bakwaas stuff.

we even still today miss pravina...so much

rojmal1 12 years ago Last sunday in UK it was a repeat of saturaday''s episode and this is happening all the time. Can somone please answer this ASAP?????. Still the best serial on the BOX.

12 years ago BBB is the best show on Indian Television, It is definitely better then Ektas Saas-Bahu sagas, and they are overly done. BBB is the best and it has the situations and family which is very easy to connect to.