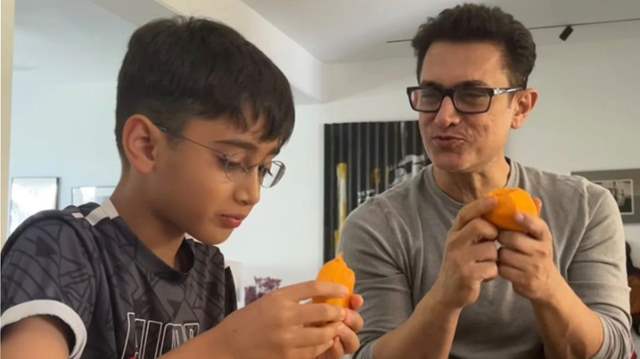 Aamir Khan's team took to social media to share a glimpse of the actor's summer routine, which included enjoying some seasonal mangoes with his son Azad Rao Khan.

Aamir and his 10-year-old son are seen in the photographs sharing a plate of mangoes at their dining table. Without a doubt, their ecstatic expressions in the candid shots convey their excitement for the summer treat.

"Have you yet purchased some for yourself and your family?" the caption said.

Soon after the post went live, fans flooded the comment section with mixed reactions to the photos. While some continued to interrogate the actor about the price of the mangoes, others simply identified with him as he ate the fruit to his heart's content.

Several people questioned the actor and made comments about whether or not he is fasting during the holy month of Ramzan. "Are you not fasting?" one user asked. "Aap roza nahi bhai?" inquired another. Someone else mentioned "ramadhan sir" in the comments section.

Aamir and his ex-wife Kiran Rao are co-parenting their son Azad in the meantime. Aamir and Kiran divorced last July. Aamir, who turned a year older recently, admitted that he didn't spend enough time with his family and instead focused on his work.

On the work front, Aamir's next film appearance will be in 'Laal Singh Chaddha.'