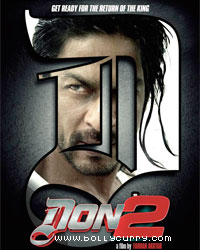 The song 'Rehmat', which has been floated on the internet, is not from 'Don 2', clarified the makers of the film.

'There is a fake song claiming to be from Excel Entertainment's forthcoming 'Don 2' doing the rounds on the internet and the popularity that the film and character has amongst the audiences, fans are downloading the song as they think it's from the film,' said a statement issued by the film's publicist.

'Please note that the song is not from the film and someone is just using it to publicise that particular song. The 'Don 2' soundtrack will be released in the market shortly and there will be an official communication in that regard,' added the statement.

'Don - Chase Begins', a remake of Amitabh Bachchan-starrer 1978 movie 'Don', came in the year 2006. Directed by Farhan Akhtar and starring Shah Rukh Khan, the film was a hit. Now the same team will be seen in part two, which is releasing Dec 23.

Zarina Wahab was Tested Positive for COVID-19; Actress ...
a minute ago

Ashalata Wabgaokar passes away due to COVID-19
3 minutes ago