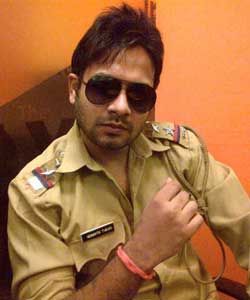 Faisal Raza Khan who was last seen in Colors 'Rishton Se Badi Pratha' as Ranvijay Singh will soon be a part of  Life OK's 'Sapno Ke Bhanwar Mein'. He will play the character of Shankar.

According to our source- "Faisal will enter the show as a cop. The character Shankar is very interesting - He is funny and has an excellent sense of humor but at the same time he is very corrupt. His entry will be marked when main lead Pooja will be shot dead. He will be investigating Pooja's case and he will also give Aarti (Vandana Joshi ) a tough time."

Tellybuzz contacted Faisal who confirmed the news, "Yes, I am playing the character of Shankar a cop. He is a very funny character. After playing Ranvijay I was offered similar role and I like playing negative characters with a twist. This character was interesting and I had to take up the role. "

Shankar might enter the show on 23rd April episode, which will also be the 100th episode of the show !

Faisal Khan Reminisces his 'Maharana Pratap' days; says 'It will ...

channel6 8 years ago oh my God, puja's father this actor rajesh jais makes me cry so much. that i forget he is acting. he is so good everytime i see him in any role in any serial or film. i like to meet this guy.he is so under exposed.

kiwu 8 years ago all the show on life ok are different ..
pooja killing is shocking ..well lets see what happens next...
bt luv all the progrms of life ok..

durum 8 years ago Killing Puja = mistake. Give us something fun!

bumtrinket 8 years ago Thanks for the article!

I love this show - the writing, acting and the bg music are all so amazing. I can't wait to see how Pooja is doing in the present day scenes. I really hope TB got it wrong and she isn't dead. Because that will just ruin everything.

Pirated_Fun 8 years ago This show is very under ratted ..I love Pooja AND Brij jodi ..As Meri Maa ended today LIFE OK can easily make SKBM half an hour show from 9:00 pm..There should be more promotion

-Nymphadora- 8 years ago SKBM is a nice show-so far it hasnt deviaed from the plot..which is a good thing...Brij is supposed to be a slightly grey character-hes not supposed to be mr goody two shoes...i think its been concealed well enough...but it remains to be seen if he is indeed the real culprit as per the real case or the story is twisted to be made more viewer acceptable!

Mandana Karimi and Radhika Apte come out in support of ...
47 minutes ago