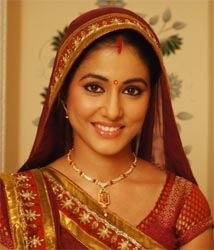 In an era where hard-hitting drama and high voltage scenes, have become a routine on Indian television, Star Plus and Rajan Shahi's Yeh Rishta Kya Kehlata Hai plans to woo the audience by sheer simplicity and by being high on expressions!!

The production house and the channel have planned to rope in a special episode sans any dialogues, highlighting the gravity of the situation where Akshara (Hina Khan) finds herself in. The entire Singhania family is stunned to know that their bahu Akshara knew all about the budding love story of Nandini and Mohit, but never did bother to tell them.

The special episode will be high on emotions and will show the manner in which everyone reacts to this situation. With only the background music to intensify the grave silence in the household, it is for the first time on Indian television that audiences will be made to experience a silent episode.

As Producer Rajan Shahi aptly puts it, "The special episode which is sans any dialogue has come out very realistically. The entire family is stunned to know that Akshara knew about Nandini's love story. The silent episode is just the result of the shock that the entire family has gone thro, and the manner in which they react to it. There is a background music playing to depict the pain of Akshara, but the high point of this episode will be the expressions shown in by all the characters involved".

When asked Karan Mehra aka Naitik, he states, "It was a great experience to be part of such a scene which has no dialogues, and where the focus was predominantly on expressions and emotions of characters. I can't explain in words on how we have shot the scene. It will be more interesting when you watch it".

According to our source, "The revelation of Akshara being a witness to Mohit-Nandini's love story will ultimately lead to the family getting cross with Akshara, so much so that she will have to leave the house. This high point will again bring to focus the dilemma in the lives of a man and woman who are only few months into marriage. It will also bring both the Maheshwari and Singhania families to the forefront, and how they sort out the situations that lie before them will be interesting to watch".

The special half an hour episode sans any dialogue will be aired on 8th January at 9.30 PM…

kasakk 12 years ago plzzzzzzzz don separate guys. try to understand akshara yaar naitik. she has some expectations frm u

12 years ago I hope that very soon we get to see Naksh back together!!!!!!

12 years ago today's episode is superb and i agree with rightnow that those who are giving bad comments to this show they feel jealous because they are of ekta group and yrkkh is on top position......please if u dont like this show u dont have any right to visit yrkkh sight , it is the best show among all serials

+ 6
12 years ago this serial has not understood ki yeh rishta kya kahlata hai ...anyways shadi ke baad it shud have ended..it has lived its life...now pls let it go nothing is gonna revive this show..

+ 3
12 years ago I like this show. All the show haters belong to Ekta group. they are jealous. This show is far better than rajan's other show bidaai. I simply love everyone in this show.