View Profile
Nuclear bomb. High-fi gadgetry. Satellites. Radio transmitters. Button cameras. And a lot more of such modern day artifacts formed the part of first time filmmaker Mani Shankar's 16 December that had released way back in 2002. The Danny Denzongpa, Gulshan Grover, Milind Soman, Sushant Singh and Dipanita Sharma starrer espionage thriller with a salt of patriotism was a decent success and it seemed that Bollywood had found a new age director who could bring an international touch to Indian cinema. 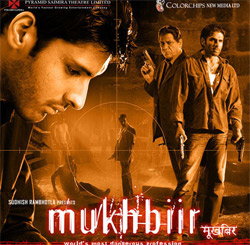 However, in years to come, duds like Rudraksh (2004) and Tango Charlie (2005) followed and it seemed that Mani Shankar was back to square one. Both the films were panned in a major way and in spite of actors like Sanjay Dutt, Ajay Devgan, Bobby Deol, Suneil Shetty and Bipasha Basu giving their nod to these projects, there were no takers.

This was the time when Mani Shankar decided to make a film with a newcomer called Sameer Dattani whose claim to fame till then was a debut with Rajshri production's Uff Kyaa Jadoo Mohabbat Hai. Even though his first ever film as a leading man bit the dust, Sameer was finding some decent projects coming his way with Mani Shankar's Mukhbiir being one of them.

A thriller which deals with the stressed life of a young informer (played by Dattani), Mukhbiir boasts of an impressive supporting cast which comprises of the likes of Suneil Shetty, Om Puri and Jackie Shroff along with Rahul Dev, Sushant Singh and Kelly Dorjee. Raima Sen is the film's leading lady.

As per the film's promotional material, Mukhbiir is a story where espionage meets the underworld. The world that is all around us, yet beyond our grasp. Ever present, yet never seen. True and credible in every detail. Fascinating, compelling, unforgettable!

Incidentally, the film was recently in news since Pritish Nandy Communications had sent Mani Shankar a letter-of-objection claiming that he owned the production company Rs. 12 lakhs.

Now we wait to see how fascinating, compelling and unforgettable does the film eventually turn out to be once it sees a release this July.