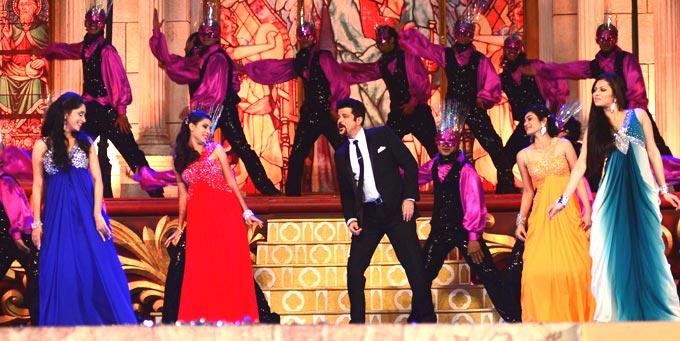 Colors very popular award event Golden Petal Awards is back in action enthrall viewers with some amazing performances and shining stars of Colors who have made a special place in the hearts of the viewers. Colors is here to honor them with awards and to celebrate the joy of togetherness tomorrow night in which the viewers will get to see some amazing acts and performances by their favorite stars.

A huge applause to the team of the 24 tele-series which became a sensational hit on television. The stage of Golden Petal Awards is all set to witness some amazing stunts which will be performed by actor Anil Kapoor. The audience didn't want the show to end which will soon return with a season 2. Anil Kapoor will be seen dedicating a stunt act for 24 which was enjoyed by the audience and the TV stars present there. Keeping the safety of audience as a priority, Anil wanted to perform the stunts and shoot post the award function got over but no one from the audience wanted to leave the venue.

There's more excitement in the bag for Golden Petal Awards viewers. At the Golden Petal Awards ex- Anandi Pratyusha Banerjee and current Anandi Toral Rasputra from Colors very popular show Balika Vadhu had to come face to face. While Pratyusha is moving on with her life with Bigg Boss after she has quit Balika Vadhu, Toral is enjoying audience's acceptance portraying Anandi. They will be seen performing on the same stage on the award night and when they met they both wished all the best to each other for their respective performances.

All in all a colorful and enjoyable night for all to watch!

Ya, i understand. BV production house voted for her . ha ha ha.

Colors aur BV achha tarika nikala. Pratyusha ko bhi le ayi so that the audiences love for Pratz as Anandi cannot come in the way of toral. BUT...

This again proves that award shows r made-up game most of the time.

But BV, in your attempt of making Toral zabardasti popular, you could have maintained a balance. Awarding her as the 'most popular' actor, making her the host & doing so much propaganda with this award show & BV , COLORS & BV have only proved in front of audience that everything is a got-up game & Toral's nomination itself is a zabardasti one & also BV is continuing on a zabardasti basis.

Never thought that one day a show like BV would need these propaganda & means to prove their popularity. ha ha ha. BV's performance has detoriorated like anything & Toral ?????????????? Well, she looks like a vamp & no acting on her part.

Happy that Pratyusha has quit this downward moving show. BV no longer deserves a talent like Pratyusha. Toral fits well in this degrading BV. Pratyusha was in BV in it's gloring times.

RainbowSun 6 years ago Great performance from u Toral Rasputra-

Both dances were awesome and u hosted very well with Kapil.

Chandrani- 6 years ago Love you Toral Rasputra and Siddharth Shukla. Both of your dance performance was really super in GPA. Liked it very much. BV team rock.

Kety76 6 years ago We'll always be your support Pratyusha Banerjee.
Eagerly await your return to the screen,
every day, we love you more and more intense.

Rhea Sharma to be seen in Ekta Kapoor's next?
33 minutes ago