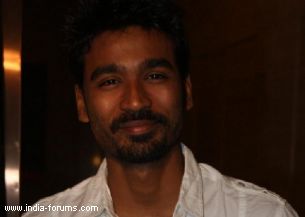 Tamil actor Dhanush, who scored a hit with Bollywood debut "Raanjhanaa", has joined hands with filmmaker R. Balki for a yet-untitled Hindi project, which will also feature megastar Amitabh Bachchan in an important role. He couldn't be happier.

"Yes guys, my next Hindi film is with Balki sir. (I'm) very excited and eagerly looking forward to it. (I'm) privileged to share screen space with Big B himself and ecstatic to be part of Raja sir's musical again," posted Dhanush on his Twitter page.

This is the third time Balki has teamed up with Big B and composer Illayaraja after "Paa" and "Cheeni Kum".

Malaika Arora shares her biggest challenges upon Testing ...
6 minutes ago