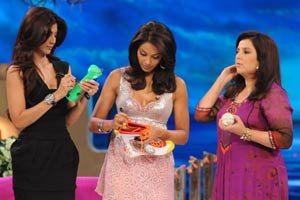 It so happens that there is a full fledged auction going on in Star Plus' Tere Mere Beach Mein, conducted by celebrity host Farah Khan. Bipasha Basu, after donating her favorite training shoes, says on the show, "I bet nobody can match up to me when it comes to the time I spend in the gym… not even John!"

If Bipasha's donation suggests keeping up a healthy lifestyle, then Shilpa Shetty's donations advocate the importance of environmental friendliness.

Apparently, the svelte actress has donated a torch that lights up when just being wound by hand. The torch is from her NGO based on protection and conservation of Environment. The torch does not run on batteries but with the help of a hand crank which makes it delectably eco-friendly. Shilpa has also donated an autographed Rajasthan Royals ball.

Other celebrities who have also made donations towards this charity based auction are Salman Khan, Priyanka Chopra and Vijender Singh.

Catch this episode of Tere Mere Beach Mein, Sunday, August 30th, from 9 to 10 PM only on Star Plus..
Featured Video

13 years ago I love this show soooooooooo much.This show should never end.

+ 3
13 years ago LOVEEEEEEEEEEEE THIS EPISODE!
so a MUST WATCH!
i so can relate to shilpa & bips...daughters rock ANYDAY! :)

+ 2
13 years ago thats sweet of them to do so. even if its kinda to promote their commitments (shilpa. LOL. lookin forward to seeing this. entertaining show.

13 years ago thx
looking forward to this episode !!!