View Profile
Arshad Warsi, the Comedy King was at the receiving end when a certain scene in Rakesh Roshan's 'Krazzy 4', directed by Jaideep(Raja) Sen required a 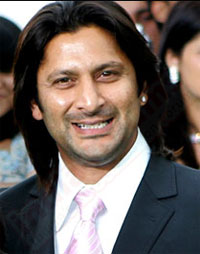 Featured Video
dog to bite or ferociously pull at his pants!

It was total chaos on sets when this scene was being shot, and the turn of events were just hilarious to the core! Scene 1 had a dog being hired for this particular scene, but the dog died due to some sickness. Later, in Scene 2, they got another dog from the trainer and tried their best to shoot the scene, but Alas!, all efforts were fruitless, for the simple reason that the dog got so friendly with Arshad that it just refused to pull at or bite the actor! The crew tried out every possible move, and even placed egg's yolks in Arshad's pants, instigating the dog to bite at his pant. But the dog proved to be smarter than the crew members here. Finally, with no other option left, they ended up using a body double for Arshad, who wore another pair of pants to get bit by the dog!

Laughing over the incident, Director Jaideep says, "Yeah, that was a one very tricky shot as the dog liked Arshad Warsi so much that he simply refused to bite him, in spite of putting egg and meat pieces in the pants. Then our DOP had to step in for the shot! It was quite amusing." 'Krazzy 4' that stars Arshad Warsi, Irrfan Khan, Suresh Menon, Rajpal Yadav and Juhi Chawla is slated for an April 11th release.