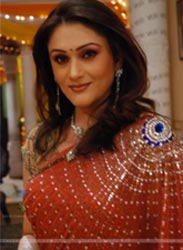 Zee and Ratna Sinha's Do Saheliyaan Kismat ki Kathputaliyaan will have Eva Grover portraying the role of one of the male lead's mother.

According to our source, "Eva Grover will be playing mother to Shaurya. She is a very sweet mother. She is loving and her husband is very strict. She is a mediator between her son and husband. She tries to fix things between the father and the son. She is the only positive character in the house. The opposite to Eva is not finalized yet."

A few days back Tellybuzz had reported that Navneet Nishan will be playing the grandmother of Shaurya.

The family of the leads has been introduced in bits and pieces so far. The proper track of the family will be starting from mid-April.

When contacted, Eva confirmed that she is part of the show but refused to divulge further details. Eva was last seen in a cameo role in Rajan Shahi and Star Plus' Bidaai.

Naivedya 10 years ago She looks way too young to be playing a mom to an adult!