View Profile
Eros International, the London AIM listed leading integrated company within the Indian media & entertainment sector releases Bhoothnath in Pakistan day and date with the film’s global release. Bhoothnath becomes the first Indian film to be passed by Pakistan Censor Board for a day and date release in its original un-cut version. It is also the first film of Amitabh Bachchan and Shah Rukh
Khan, the two topmost stars of Indian film industry, to release in Pakistan. 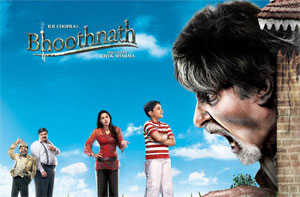 Eros will be releasing Bhoothnath on 9th May across all major cities in Pakistan, including Lahore, Karachi, Rawalpindi, Multan, Faisalabad, Gujaranwala, Hyderabad and Gujarat, in association with renowned production and distribution houses Evernew Group and HKC Entertainment who have been in the business for more than 50 years.

“Bollywood films have always had a big market in Pakistan. Pakistanis are absolutely ecstatic to have Amitabh Bachchan’s and Shah Rukh’s first film to be seen on a big screen in Pakistan. We are glad to be working with a leading player like Eros International for Bhoothnath release.”

“We are extremely delighted to be able to distribute our films in Pakistan, as the market has huge appetite and potential. Bhoothnath is the ideal film for our launch as it stars Amitabh Bachchan and Shah Rukh Khan who have great fan following in Pakistan.

There is huge excitement for the release. Bhoothnath is the first among many in our release pipeline and we look forward to working with Evernew Group and HKC Entertainment to release more films in Pakistan soon.”