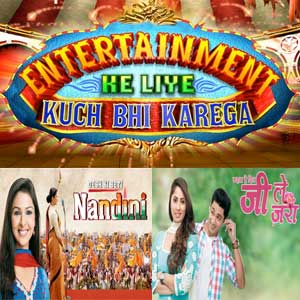 While the news of Shristi Arya's Kehta Hai Dil... Jee Le Zara going off air came as a shock to the audience since the mature love story had garnered enough popularity, it seems it was a well thought of strategy by the channel - Sony TV.

According to a reliable source along with Jee Le Zara, one more show will be given the axe to make way for a non-fiction show. While the news was making rounds for long now it has been confirmed that Rashmi Sharma Telefilms, Desh Ki Beti Nandini too will go off air informs our source, "Both Jee Le Zara and Nandini will be going off air at the same time to make way for a one hour slot for the non-fiction talent hunt show Entertainment Ke Liye Kuch Bhi Karega to be hosted by Anu Malik. The auditions for the show which is in it's fifth season are over and it should go on air in mid-June post the IPL season."

"While Desh Ki Beti Nandini never picked up on the popularity meters, Jee Le Zara was doing quite well for itself. Jee Le Zara which was launched in mid-August last year had a one year contract according to which it had to air just four episodes in a week but then after it started it was made into a five day a week show so as it is has completed its one year as per the time duration."

When we enquired with both the producers, Shristi Arya confirmed that her show was going off air, and producer Rashmi Sharma maintained, "I have no official information on the show going off air as yet, so I really cannot comment."

Sony TV also has another show Encounter based on real encounter incidents. "That show will most probably be for the weekend slot," concludes our source. As of now there is no news of the two big ticket shows that are most awaited on Sony which star the Bollywood couple - Amitabh Bachchan and Jaya Bachchan. Both the stars who will be seen for the first time on Indian Television in two separate fiction shows which were announced last year have been on hold for quite some time now.

Well, it seems lots of new and interesting stuff coming our way soon!

wish5 6 years ago Jee le zara is the best show on SonyTv yet they want to axe the show. Can't understand their logic. Why they want to lose a good number of viewers. No #JLZ means No sonyTv. That's for sure.

RachnaaP 6 years ago if Jee Le Zara go offair, sony v iewership will go down. i hate sony for this. it is doing good

kalpana19 6 years ago Don't Start Boycotting the Jee Le Zara show Quite yet.
Viewers have written letters to the networks and production companies, wrote articles about shows and in some cases pass petitions to show support of a show.

Plusq8 6 years ago JLZ is an amazing show and should not b discontinued. Sony should move JLZ to another time slot but not stop it. Great story and cast.

eshi.nl 6 years ago Hope to see Keerti in a new show.
All the best to cast n crew of Nandini

coolmona_1980 6 years ago Its unfair...sony is not at all fair..why a good show like JLZ have to go offair its a great show and doing well too...very bad highly disappointed with sony tv...

funalways 6 years ago i love JLZ...hope it had continued for a few more months :(

-Nightingale- 6 years ago Sony should shut all their soaps n concentrate on reality n crime based soaps...

they start good n go out of way..for all shows