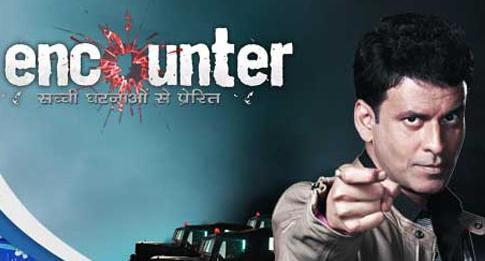 What's it all about - Encounter is supposed to be a thrilling show depicting real encounters (which will obviously be fictionalized) between the police and gangsters. The series had promised the viewers a dose of thrill, action, drama in an unusual and first of its kind concept.

What works - Nothing much! The concept was something new and interesting but it seems to have fizzled out due to inappropriate implementation. What is noticeable is the background music which works well for the kind of show it is. With side locks which were too obvious and hair that was too long it was only the acting of Rohit Khurana and Aditya Redij which saved the show. Rajesh Shringarpure's deep voice too was helpful in keeping some interest alive.

What does not work - It was odd the way the characters were dressed up and there was a certain disconnect to the show. The first story was supposed to be set in the 80s but then people who were young in the 80s will immediately tell you that the kind of styling for clothes, accessories and hair given to characters in this story is not as close to the look of the 80s. One glaring error was that in the 80s the Mumbai police constables wore blue uniform which comprised of a blue shirt and blue shorts instead of the khaki full length uniform shown in the show. Even Manoj Bajpai's introduction failed as he was not impressive enough. There was no sharpness and there was a certain lack of interest in his attitude.

Our take - There is no dearth of real life encounter stories but the content has to be handled well for the show to take off. More detailing when it comes to looks, characterizations and styling will give the show a polished appearance.

In the recent past we have seen many Bollywood movies which have focused on gangsters and gangster wars in Mumbai also showing the end of gangsters due to encounters and the show too deals with same stories however, due to lack of finesse the show appears dull in front of these films. It is also not that the show has limited time, one story stretches on for one hour each for three days over the weekend making it almost the same length as a full length feature film so there is no reason why the content cannot be done justice to!

We have always looked forward to shows which are different from the saas bahu family dramas and many were interested in watching Encounter for its different and original concept but it turned out to be a disappointment.

The show comes on a channel Sony TV which has an excellent record of crime thrillers which have been successful all this time. Even though it has become lackluster CID has been around for 16 years now while Crime Patrol: Dastak which has been around for almost a decade is a benchmark for other channels to have similar shows. The courtroom drama series Adaalat which deals with judicial cases too is doing well so Encounter will have to face in house competition and comparisons which means they should have a tight rein on the creative department.

Hopefully, we will see improvement in the coming episodes if they tackle these issues and manage to capture the audience's attention.

bitblue 6 years ago I FEEL CRIME PATROL AND ENCOUNTER ARE THE BEST so true.

adityapaih 6 years ago OH PLEASE THIS SHOW IS BETTER THAN THE OTHER CRIME SHOWS. I FEEL CRIME PATROL AND ENCOUNTER ARE THE BEST 2 CRIME RELATED SHOWS. FRIENDS DON'T BELIEVE THIS CRITIC. PLEASE WATCH THE SHOW. THE LAST 3 EPISODES WERE AMAZING.

pinkpearl5 6 years ago CID is the best. Thanks for the article anyways!!! :)

CUTE_SAPNA 6 years ago glad that this is 4 the veryyy 1st story. MISHAL RAHEJA u rocked yesterday. luv u baby, muuah.

india4u 6 years ago ENCOUNTER is much better than some of the shows like Super Cops Vs Super Villians, MAD IN INDIA etc. There are so many shows on other channels you don't criticize them. Even CID has improved nowadays. Only you don't like CID. Agree Comedy Circus and Bhoot Aaya were huge let down from Sony but apart from that all the shows are fine. Hence I am happy with tri-weekly of CID,Crime Patrol, Adaalat and Encounter.

soumi93 6 years ago I do agree that the dresscode doesn't matched up to 80s timing...police unifrom seems to be anything else splly the cars are nt lyk that as shwn in the shw...needs improvement badly

The show is good not your review. Watch the show Mishal Raheja and Prashant Narayan entering the show tonight @ 9pm on SONY's Encounter

IT HAS BECOME HABIT OF THESE CRITICS TO CRITICIZE SONY'S shows even if it is good.