It's always fun to witness the bride and groom-to-be dance on their own sangeet ceremony, complete with all the jhatkas and matkas of bollywood. But really, which sangeet could possibly have the groom-to-be set the stage on fire dressed in the garb of the legend Elvis Presley himself... and dancing to his desi version of 'Emosional Atyachar'!!! Well, that's Ranbir for you all from the Zee show, Ranbir Rano… 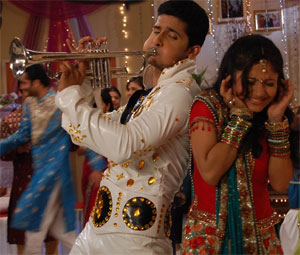 "It was fun shooting that sequence of sangeet in the show. I have always admired Elvis and Michal Jackson, and this time I got an opportunity to perform in that look", says Ravi aka Ranbir.

With the couple finally tying the knot (on screen!) in the 1st week of April, seems its becoming hopelessly difficult for Ranbir to follow a code of conduct. The lad seems to be experiencing a gamut of embarrassing emotions! To elaborate, soon after the ring ceremony, Ranbir, head over heels in love with his eternally yours, Rano ... pulls her aside and begs for a peck on the cheek. Rano, will all her coyness intact, softly slaps her dupatta end on Ranbir's face and runs back to the hall, expecting Ranbir to follow.... And so, he does... and how!

With his traditional sherwani turned into a rocking Elvis outfit and a cap to match... the heartbroken Ranbir returns with a shocking solo performance on Emotional Atyachar... as an answer to Rano's denial to his kiss request! Thoroughly regaling everyone around, and profusely embarrassing Rano, who's keenly aware of what led to his new avatar... all it took for Elvis to be back was have Ranbir's demand for a kiss be rejected by his lady love...

Elaborating on the attire he quips, "It was hot, and dancing in that attire made me even tired, but we all had lots of fun. The cap, heels, shoes etc were like Elvis Presley. This song has not been shown in any serial the way it is used in Ranbir Rano".

"I have been a fan of Jackson and Presley since child hood and had always copied their steps too. I used to dance a lot when I was a small child. The moment I came to know about this song sequence in the show, I was very happy", he adds further.

Well the show will soon be completing 100 episodes. "Yes in this week itself the show reaches the 100 mark. For now the high point in the story is our marriage. There are lot more things to come, but for that you need to wait and watch", he concludes.

So viewers are you ready to watch Ranbir in Elvis avatar??

-Preeti- 11 years ago thanks

both look good in those outfits

Ananya Panday opens up about her character from Khaali Peeli; ...