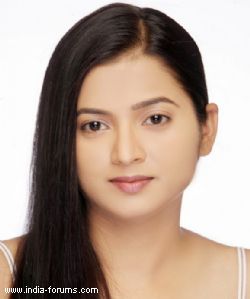 It was already reported that Ekta Tiwari aka Radha of Star Plus' Tere Mere Sapne has been unwell due to measles and an accidental crack in her ear drum. Seems all was not enough for the lady to suffer as the latest we hear is that the actress has been hospitalised…

A source says, "Ekta was not keeping well since few weeks. Initially she was suffering from measles, but from the past few days her immune system has been weak and was not able to work for a long time. When she consulted the doctor, she was asked to get admitted as early as possible."

"Since three days she is in the hospital and has done all the tests. She was detected with a viral infection in blood and thus she was asked to continue to be in the hospital for a few more days. Today she might get discharged and will start shoot from tomorrow, if the show demands her, "adds source.

We tried contacting Ekta to ask about her health and she managed to speak, "Yes, I would get discharged by today; all depends on my reports for which we are waiting. Hope I get out of here soon."

9 years ago get well soon

9 years ago Why is she expected to back to work a day after getting discharged. What is wrong with these people, can't they give her proper time off to recover properly.

11 years ago SORUCES SAY THT GIRL HAS SOME SCRATCHES AND SHINEY HAS NONE THT MEANS THERE WAS NO STRUGLLE WHO HAS HEARD OF A GUY WHO SCRATCHES? IT WAS CONFIMRED TTH THERE WAS INTERCOURSE BUT IF IT WAS FORCED OR NOT ONE KNOWS

Sharanaya 11 years ago I HOPE U SEE THIS COMMENT.I AM WAITING FOR YOU REPLY.WHAT THE SCRAP U MEAN'' If he didn't rape, then great! But if he did, and you still support him...then I don't know what you are made of because I sure couldn't tolerate him after that''.WHAT THE RUBBISH U TALKING ABOUT.U THINK I WILL STILL SUPPORT HIM.HE DESERVE TO BE HANG.NO DRAMA OR BAIL.BE MATURED AND GROW WHEN U POST COMMENT.U SHOULD GROW UP NOT ME..I REALLY DON'T KNOW WHAT U ARE MADE OF .GROW U GIRL UNDERSTAND AND WRITE SENCE.

Sharanaya 11 years ago Hey u have totally mistaken if he raped he derserve to be hang?what u mean by this'' But if he did, and you still support him...then I don't know what you are made of because I sure couldn't tolerate him after that''.IF SHINY ADMITTS HE RAPED U THINK I WILL LIKE HIM.I WILL NOT SUPPORT HIM AND HE DESERVE TO BE HANGED.

+ 2
11 years ago Rape is a serious crime. If the allegations are correct, then will his fans agree? Or will they still accuse the court of being incorrect? If he didn't rape, then great! But if he did, and you still support him...then I don't know what you are made of because I sure couldn't tolerate him after that.

Sharanaya 11 years ago Hey blessed cute one,what do u mean above which u written?DID U WITTNESSED THE RAPE.THEN HOW COULD U CALL HIM ANIMAL?SHAME ON U ?AND WHAT U HAVE WRITTEN BELOW IS FULL CRAP AND RUBBISH.DON'T THEN DON'T WRITE?SILY GIRL.THIS IS THE REPLY TO BLESSED CUTE ONE

Sharanaya 11 years ago DON'T JUDGE TILL THE PROOF IS OUT.THIS ARTICLE ABOVE IS JUST SHIT AND SCRAP.

11 years ago the sys is toooo slowly .. dragging everythg