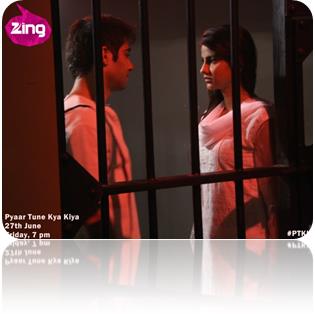 Pyaar Tune Kya Kiya, the real love inspired series launched in May seems to be on a blitzkrieg to showcase some of the most versatile content to the discerning Indian viewer. The forthcoming episode will witness stars of "Ek Villian" play celebrity hosts, and present a rather special episode.

This week's story revolves around Mitalee, a homely girl hailing from a small town in Maharashtra.  Mitalee belongs to a middle class background, is extremely hard working and is daddy's little girl! She trusts her father's every word and fully understands the need to excel academically. Thus when she finds love in her colony friend Ankit, it's a very secret affair as her family would not approve of it.  To them it would seem that Mitalee could spend that time wisely, by studying.

But being the studious girl she is, she dedicatedly preps for her college exams. So much so, that she topped not only her entire class, but the entire college! One would assume after such success it's surely the time to celebrate. But fate had other plans for Mitalee, even though she left for a night out with close friends, she never returned!

Can one decision, one minute change her life forever? Is it ever possible for Mitalee's life to ever be the same again? Watch this unpredictable, episode with Sidharth Malhotra and Sharddha Kapoor taking viewers on a roller coaster ride!

Speaking on the occasion Sidharth stated," I am extremely thrilled to be a part of Pyaar tune kya kiya. The format of this show is so new and refreshing as we are left to decipher our own endings. This series really amazes me as one would go to any length to save their love much like Ek Villian. This episode is very dear to my heart as I identify with the storyline".

Adding to this, Sharaddha said," I've had so much fun on the sets of Pyaar Tune Kya Kiya and I would love to come back. After having experienced the show first hand, it excites me all the more and I will try to watch it every week".