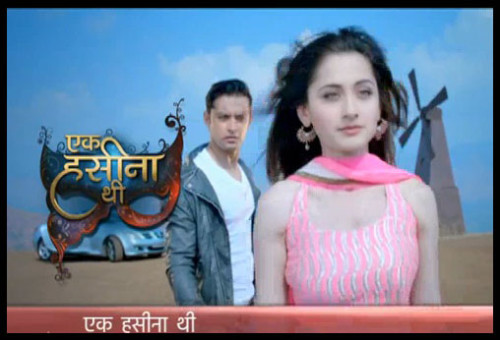 Cinevistaas' recently launched romantic thriller show Ek Hasina Thi on Star Plus, wherein Durga (Sanjeeda Shaikh) is on a mission to reveal Shaurya (Vatsal Sheth) as the real culprit who had raped Payal (Teena Chopra). Durga has already tried out different ways to reveal the wrong deeds of Shaurya which he has kept hidden from everyone and on the other hand, Shaurya is trying hard to impress Durga with his charming personality.

In the forthcoming episodes of the show, we will get to see some drama taking place at the party as our source has informed us that, "Durga and her father (Bhupinder Singh) will be throwing a party in which Durga decides to revive the past of Shaurya in front of the media and everyone. In the party, a journalist brings forth Shaurya's rape case into limelight to which Shaurya becomes furious and he assaults the journalist. Shaurya's act makes his family feels embarrassed."

The forth coming episodes of the show will reveal whether Durga's act of bringing in a fake journalist to revive Shaurya's past will come out in open or not and what will be Durga's next step to keep everything hidden from all.

Zaya.Beintehaa 6 years ago I love this drama it sooo interesting. I wonder how it unfolds

sabreen_06 6 years ago Loving ek haseena thi show
sanjeeda is looking vry beautiful in show i always liked her as ayesha in kamayath serial and wanted to see her in main lead..she is doing wonderful job as duraga and so is the shuraya played by vastal

Tajmahal1 6 years ago Just speechless. Both the leads Sanjeeda and Vatsal are something.Never seen this kind of extravagant show on indian tv. Simply superb.Started with a big bang. Keep it up.

Mehek25 6 years ago One of the best shows on tv at the moment. Sanjeeda is awesome in it.

CAT_z 6 years ago One of the best show of tv in current time.
Sanjeeda rocks.

Fiza28 6 years ago Copy of an American show on ABC called Revenge... love that show n love this as well

BinKuchKahe. 6 years ago Average start but still looking forward to more as of now.
Agree with some of the comments that the show is somewhat similar to Main Naa Bhoolungi but there are some differences as well. I like both shows!