View Profile
Veteran Tollywood actress Rituparna Sengupta has traversed a long way starting with Bengali films and meandering through the alleys of Bollywood. From being a regional artiste she has spread her wings to the national and international arenas. A quick chat with Rituparna, the central beam of the forthcoming societal drama, Sirf.

Q: How do you look at your role in Sirf?
A: I play a very small town, innocent wife from Jabalpur who comes to Mumbai and is flabbergasted by the glamour and fast life of Mumbai. I am married to Parvin Dabbas in this film. I am very insecure because of my husband's professional life. Manisha Koirala is playing Parvin's boss who has a lot of influence on his life which is why I get insecure. My role revolves around the struggle in marital life and how I deal with the issues, though my role has a comic touch.

Q: Once Sonali Kulkarni admitted that she wanted to play your character in the film, does that mean your role is stronger as compared to hers? 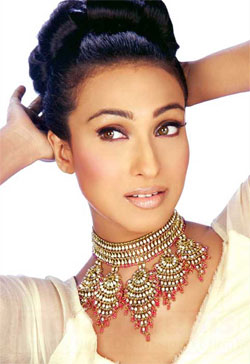 A: I did not know that she has made this statement. It is very kind of her. I really like her role in the film and honestly feel that she is a great actress.

Q: Are you not scared that the release of Sirf clashes with the glitzy commercial film, Tashan?
A: I think we can't compare Sirf with Tashan. Of course, we can't deny the fact that Tashan is a very big film. But this is something which is not our problem. I have full faith in my production team and feel that they have left no stone unturned to make this film great. I would say that a sensible audience would go and watch both the films.

Q: Films like Life in a Metro, Chalte Chalte, KANK and many other films have portrayed problems in married couples' lives and they were highly appreciated by the masses. Do you think Sirf'will be able to live up to the expectations like those films?
A: I definitely feel it will make its own impact because in the end the whole package matters. I honestly feel that the film has an awesome storyline and the treatment is really very strong.

Q: Apart from your role, which character do you like the most in the film?
A: I really like Sonali's character because of its sweet touch. Manisha's role is also very impressive because of the strong and independent flavour. Actually, everyone has an equally important role in the film. Everyone is very impressive.

Q: There are many films including Mujhe Rang De, Love Game, Mittal vs Mittal, Saab Chai Pani?, Love Khichdi, Gurudakshina, BBD and Songsoy which are in the pipeline for release. What is their status?
A: Gurudakshina is not happening. Mittal vs Mittal and another film called Dil Ka Armaan are about surrogation. Those two films and Saab Chai Pani will be released in the near future.

Q: You seem to be inclined more towards art cinema than commercial cinema. Why?
A: I don't choose serious roles deliberately. But as an artiste I look for my contribution in any film I do. I am looking forward to commercial roles but they have to be substantial.

Q: You are multi-talented with a prowess in dancing, social activity and of course acting. How do you manage?
A: As a person I love contributing to society in any form. And I love doing dancing, acting or social work. And when you love something, it becomes very easy to take out time for that. So I guess this is how I manage all the stuff.

Q: Bengali or Hindi, in which industry do you find a balance between professionalism and flexibility of work?
A: I feel both the industries have professional as well as unprofessional people. So we can't really make any comparisons. I am very lucky to have worked with good people till now.

Q: Among all the Bollywood actors, with whom do you think can make a better pairing onscreen?
A: Honestly, I would love to be paired with Aamir Khan and Shah Rukh Khan. Both are superstars. My fans in Bengal also expect me to work with them. I wish it comes true one day.