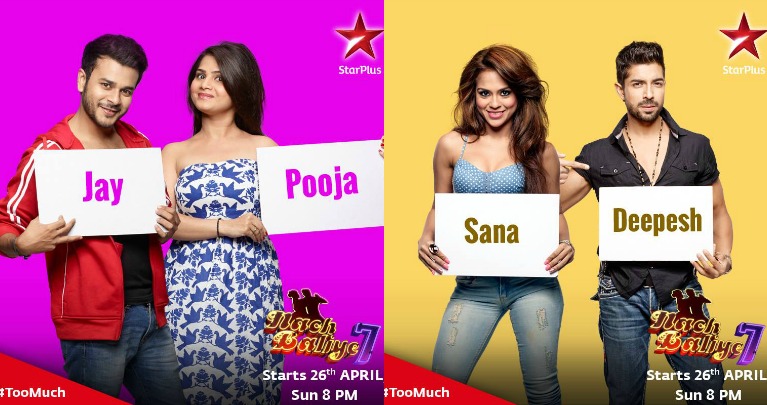 After Shakti Arora and Neha Saxena being eliminated 2nd on Nach Baliye 7, following that week will have no elimination. However, the makers will have to compensate, so this time it is going to be double elimination in the 5th week.

As we all know, Smilie Suri and Vineet Bangera were the first one to get eliminated from the show, too much of drama followed the next week regarding Rashmi Desai taking a leave from the show. This controversy lead towards no elimination that week. But in the following week, the viewers will witness two couples, Sana Saeed - Dipesh Sharma and Jay Soni - Pooja Shah, getting eliminated.

Our source informs us, "In the 5th week, Nach Baliye is going to witness double elimination. Jay - Pooja and Sana - Dipesh will be the couples to get eliminated in that week. It would be a tie between the couple getting the lowest marks on the show."

We wish the couples good luck for their future endeavors!

+ 7
5 years ago Nach Baliye stopped being fun after the first two seasons but this one has lost the essence in the most ridiculous way! The format makes zero sense and it's just too weird. Two weeks were enough even though I didn't watch the daily punchnama or whatever it's called. Not watching further!

5 years ago this time nachbaliye is nt good and bakwas. anyways muranal is the best.

5 years ago More then Nach it seems like Ekta's daily soap going on and not to forget most of the participants are her show actors.

5 years ago Jay is too sweet to stay in nach baliye. Bigger nautankis are there.

5 years ago i love shakti n neha very much, their performance really awesome, if can i want they win, so sad they only 2 weeks, they really cute n sweet couple, n they really rocking the stage,

+ 9
5 years ago One of the most confusing and fixed reality shows I have ever came across.

+ 3
5 years ago The show literally seems fixed!! Shakti and Neha were my favourite! I wanted them to win Nach Baliye!
I don't understand how Rashmi is still allowed to stay, when she should have been disqualified. It is really really unfair! It's all fixed! :(

+ 2
5 years ago This too much shit is sooo boring... I only watch the sunday episode!

+ 3
5 years ago love shakti arora and neha saxena..they are the best..

+ 4
5 years ago Ekta has spoiled nach with her too much. Every thing is planned b4 then y she is hosting this reality show instead she can conduct a drama. If shakti is busy with his show then y did they select him for nach & participated him for only two weeks? Previous seasons there were multiple stars who managed both nach & daily soaps together.