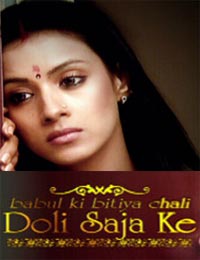 According to our source, "Doli Saja Ke which has Indraneil Sengupta and Barkha Bisht as leads will end on November 13th".

When contacted, Producer Aroona Irani confirmed the same and said, "Doli Saja Ke has had its good phase, and the show will be ending on November 13th".

Indraneil Sengupta who plays the protagonist Daksh says, "We are not aware of the exact date, but yes, Doli Saja Ke is certainly ending in November. It will be a happy ending of course for the couple".

Aroona Irani's A.K. Films will be coming up with a new show on Sahara One, which will launch sometime in December.

Confirming this, Aroonaji told Telly Buzz, "We don't know as of now whether our new show will get a daily or a biweekly slot. But yes, we have a new show coming on Sahara One, the concept of which I don't want to talk about now".

We sent a text message to Mushtaq Shiekh, Creative Director, Sahara One but we did not get any revert till the time we filed the story.

SABIE 10 years ago I thought this show aired for 3-4 years, no? Does anyone remember when it started? I do wish they showed a few weeks of Anu and Daksh being happy with their family after all the years of seeing Anupama tortured.

bhavnavyas 10 years ago Hey Guys, I too never wanted this show to end, i could have written this show for next one more year...i had my plots, twists, turns ready.....but....

pradeepraghavan 10 years ago Thank God! 'Doli Saja Ke' is ending. As I remember this serial started on 7th May 2007.

MasoomaBukhari 10 years ago not another one. Why these shows are ending!! First ghar ek sapna, without any reason, and now Doli Saja Ke.

brainychild92 10 years ago know what...its about time.. the story is getting extremely confusing as well as annoying..