Divyanka Tripathi might be thoroughly enjoying her comic stint on television playing the role of Mrs. Sharma in SAB TV's Mrs. & Mr. Sharma Allahabad Waale, but in real life the lady is a bit disturbed as she could not go home to celebrate the occasion of Raksha Bandhan with her brother. 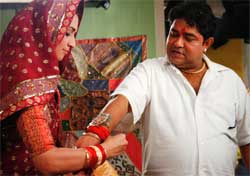 Amidst her hectic schedule and ill health, Divyanka told TellyBuzz, "I am feeling really low as I could not go to Bhopal to be with my family for Raksha Bandhan. My brother got upset when I told him that I cannot make it this time".

However, while shooting the Raksha Bandhan episode in her show, Divyanka had a whale of a time, wherein she tied Rakhi to Ashiesh Roy who plays the role of Anna. But this particular news upset her real brother even more!!

Says Divyanka, "When I narrated the Rakhi scene to my brother on phone, he got hurt all the more. He now wants me to be in Bhopal at the earliest (smiles). I had couriered my Rakhi home, and my cousin sisters have tied that Rakhi on my brother's wrist. But I have decided to take an off very soon, and be there with him. I will buy a special gift when I go".

Elaborating on the Rakhi scene in the show, she states, "I share a very nice rapport with Ashiesh Roy, and shooting this particular scene was indeed a pleasure".

Guess Divyanka has to be content with the Rakhi celebrations on screen till the time she gets an off!!

tulipbaby53 10 years ago aww!! i hope she gets time off soon to see her family and brother especially!

bombayker 10 years ago It is so simple if she could not go Her Brother can come down to Mumbai???

Manusha_Divz 10 years ago aww she's so sweet,hope you meet your brother soon :D

Ethereal-Path 10 years ago awww... i hope she gets off soon for her family time..

musicheals 10 years ago aww! yes...this is called pure love! &lt;3
Love u Divyanka
hope u get to go there soon :)

Shaz_x 10 years ago Aww this is what you call sibling love...
This show is so funny and it's great for a laugh :D
I also loved Divyanka in Banoo Main Teri Dulhan.

~*puja*~ 11 years ago i''m glad they are getting offers, A Wednesday was an excellent movie and there should be more like it!

Bigg Boss 14: Here's why Gia Manek will NOT enter the show
8 minutes ago

Ishq Subhan Allah Bids adieu after a successful run of two ...
10 minutes ago