Divyajyotee Sharma who essayed the role of Kali in Star Plus' Raja Ki Aayegi Baraat is on the road to recovery after suffering a severe fracture on her elbow, when she was hit by a motorbike in August. 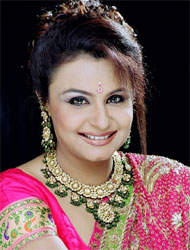 Featured Video
The actress is now planning a comeback to Raja Ki Aayegi Baraat. "Yes, I have been told that I will start shooting sometime next month when the ongoing track ends. In addition to this, I have been offered an international film as well as one down South. This is the reason why I am not getting into too much of daily soaps".

She had to undergo an operation on her elbow, as it was a major fracture. "I have not recovered fully, as my elbow still hurts many a times during movement. Also, with all the treatment and rest, I have put on bit of kilos which really puts me off", she adds.

"I was out of action for almost two months, so eagerly looking forward to resume shoot for Raja. I am not aware of the track, all I know is that I will be back next month", she concludes.

13 years ago Kali come back soon. There is nobody inthis mehel who can throw this imli at least you will do it.

+ 3
13 years ago we were reaaly missin gher...........at least she and bhanu are fun to watch..if they would have been around this pathetic track would haev been fun to watch at little extent

13 years ago the sooner u come back the quicker this track will end!!!

+ 2
13 years ago This is the best news I've heard in ages. Glad to hear she's recovering swiftly and even more glad that she's got a few film projects on her hands. All the best Divyajyotee and looking forward to your comeback.

+ 5
13 years ago wow that is great. Kali we missed you and need you all the best for your recovery adn new project.

+ 3
13 years ago Wow Kali is comming back ... i m so happy ..i will also go back to watch Raja when she will be there ...Hope she gets better soon too ...about creatives of RKAB huh don't want to say anything about Rashmi sharma and her disgusting crap creative team and writer Mr. Sampuran ..i will be more happy to see Divyajyotee entering and imli and her bro Sampuran being kicked out of RKAB