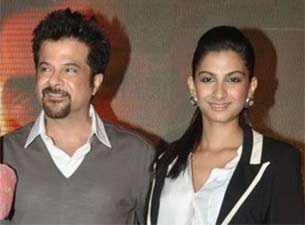 Anil Kapoor and his daughter Rhea have joined hands with Walt Disney Studios to co-produce "Khoobsurat", a remake of the 1980 Rekha starrer "Khubsoorat".

Sonam Kapoor will be seen playing the happy-go-lucky girl, essayed by Rekha with elan in the earlier Hrishikesh Mukherjee directed family entertainer.

Her character Mili is vivacious and is responsible for turning the lives of a royal family upside down. It also stars Kirron Kher, Ratna Pathak Shah and Amir Raza Hussain.

"A delightful film, I believe that 'Khoobsurat' will be entertainment with a heart. We are also looking forward to working with Anil Kapoor Film Company on this lovely film," Rucha Pathak, senior creative director - Studios, Disney UTV, said in a statement.

The film is directed by writer and popular ad-film director Shashank Ghosh.

"Disney always stood for wholesome and heart warming entertainment and we look forward to creating that with this film as well. Shashank's take on the film is unexpected, colourful and fun everything you find in your favourite Disney movie!" said Rhea, who is also Sonam's younger sister.

The film's shooting has already started in Bikaner, Rajasthan and it will hit the screens in mid-2014.