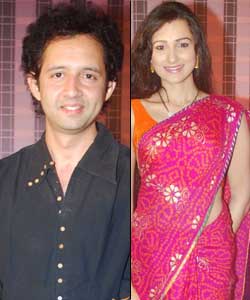 Star Plus' Sasural Genda Phool produced by Ravi Ojha Productions, is presently going through a tough phase after the unfortunate accident of Ishaan. Apparently, in the coming episodes, the family will see a celebration time…

A little birdie chirps, "As of now, Ilesh (Shyam Mashlkar), who has never been independent with his financial status, is now doing well in his new job and is getting enough profit from the commission in property deal. And hence the now responsible husband to Disha is all set to father a child."

"Disha will soon be acknowledged as pregnant. Though the shooting for the same has not started, Disha is on its verge to spread smile to the family with the good news."

We contacted Pooja Kanwal and she confirmed, "Yes, as of now Ilhesh is doing well in his job and is quite satisfied. Disha and Ilesh are planning to have a child."

Good news on its way in Sasural Genda Phool…

xxMATSxx 9 years ago aww thats nice!!!! I hope they dont make it into a sad track though! thank you!

abhi786 9 years ago Good news and happiness in kashyaps family..

khosla03 9 years ago finally a good news...some fun scenes otherwise it was all suhana crying i feel soo bad...:(

Thaathi 9 years ago Yaaay !! i Love This Show !! The Best Show On StarPlus !! Suhana & Ishaan Rock !! I Love The New Track ! Interestin Twists One By One !! Great Goin Sasural Team !! Keep It Up !!

JustNihaaa 9 years ago wow such a gr8 news... looking fwd to c this episode