Caught under BollyCurry's scanner this week is a man who apart from being a remarkable director, is also a screenwriter and producer par excellence - Subhash Ghai. Known as the "Showman of Hindi Cinema", Ghai has been known to break subsisting trends and set his own path-breaking ones. 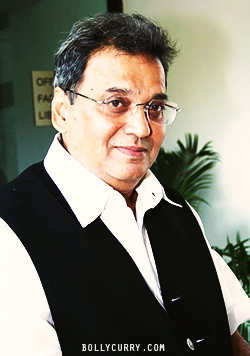 Many are unfamiliar with the fact that Ghai initially started off his career as an actor. He played small roles in a few movies including an appearance in the popular film Aradhana (1969), followed by lead roles in two others. His directorial debut came in 1976 with Kalicharan which was a breakthrough hit at that time.
During the period between 1980s and 1990s, Ghai climbed the ladder of success with movies such as Vidhaata (1982), Karma (1986) and Saudagar (1991). His directorial venture Khalnayak in 1993 was equally successful as it was controversial, courtesy the hit item song "Choli Ke Peeche Kya Hai". He is also credited to having introduced talented actors such as Jackie Shroff, Mahima Chaudhary and Anil Kapoor to the Indian cinema world.
Akin to Yash Raj Chopra, Ghai has also been known to present his actresses with a beauty that leaves the viewers enthralled. Be it Mahima Chaudhary as Ganga in Pardes (1997), Aishwarya Rai Bachchan as Mansi in Taal (1999), or Mishti as Kaanchi in Kaanchi (2014), Ghai's simple portrayal of his leads connects the audiences on a far deeper level emotionally.
Subhash Ghai is a renowned Bollywood personality and a brand in himself. With regards to his various accolades, he has won the Filmfare Best Director Award for Saudagar (1992), Best Screenplay for Pardes (1998) and the National Film Award for Best Film on other Social Issues for Iqbal in 2006.
It has been noticed that Ghai keeps himself on hiatus for few brief periods, busying himself with producer duties, after which he makes a spectacular comeback with a directorial brainchild. The mastermind is responsible for setting a high benchmark with the nature of movies he's made and BollyCurry acknowledges his genius for the same.
Did You Know?
Despite his latest venture, Kaanchi, being a letdown, we are sure Ghai has the potential to overcome the stakes with his next endeavor. BollyCurry wishes him success for all his future projects and may he forever keep the entertainment level high for us viewers.
Writer: Pooja B.
Editors: Ritchelle C. and Jenifer Y.
Graphics: Komal P.
Do you have a comment or suggestion for BollyCurry? Drop us a PM at BC_Dropbox today!
6 Likes