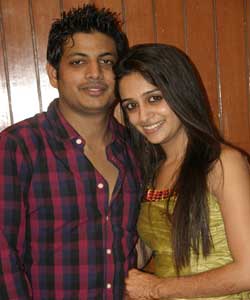 Dipika Samson, the protagonist of Colors' Sasural Simar Ka can now breathe a sigh of relief as she no longer needs to keep her marital status a secret! For the uninitiated, the actress who is now married for three long years was apparently forced by the channel to hide from one and all that she is actually married. However, this news of her being married did make headlines lately.

TellyBuzz dug in a bit more and got successful in capturing a picture of the husband and wife pair..

A little birdie tells us, "Dipika is married to Raunak Mehta for three years now. Recently, Dipika celebrated her birthday on the sets of the show, and hubby Raunak was present to share the joy with his wife".

Dipika who started her career being an air hostess debuted on small screen with Imagine's Devi. The actress has a great support from her better half, which is evident from her elevating career graph.

When TellyBuzz tried to get in touch with Dipika, she was unavailable for comments.

Guess, Dipika can openly pose with hubby dear from now on...

+ 2
9 years ago isn't she is tooo young to be married any how its her life her ways,
Good Luck for the Show girl,
i hate it though but my mom loves it so i can't hate it more :D

+ 6
9 years ago they look good. i never knew she was married

rekhavy 9 years ago Never knew this...guess she can breath a sign of relief now:)...But still got to give her credit for hiding the news from the ears of the media and that too this long...

+ 2
9 years ago @gaurav_fan: he's not in the industry i don't think but he's drashti dhami's (geet) brother

+ 2
9 years ago She's married? Wow cool,they do make an awesome pair,but why did they let her hide it and y is there a big issue for married girls not 2 be main leads,ymggk Suhasi Dhami is married and she's doing so well.I think married people should be accepted for how they are