View Profile
Has Dino Morea got all wired up? No, nothing to do with his tensions, girlfriends or largest number of duds at the box-office. Dino is a gizmo freak.

From the i-pod to the i-Mac, some are compulsive acquirers, they havce 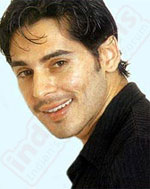 Featured Video
them all, and want them all, and some more. Gizmos give them an adrenalim rush and a high than perhaps no superhit or supergirl friend could. Too bad for the filmmakers and the arm candy.

Dino Morea is nothing if not a clued in guy and all wired up. He is the proud owner of nearly all the product series you name in the market, and never seems to have enough of them. He already had the i-pod and the i-phone, and now has gone and bought himself a brand new Macbook Air. He dimpled wickedly and said, "It is unbelievable how light in weight it is...it has all the features that I always wanted and which are really exciting to learn and explore, especially with its track-pad." Oops, he's done it again, as Kylie Minogue sang for herself years ago!

Dino professes to have always been a lover of technology and gizmos "and being a tech-savvy guy I purchased it on my trip to South Africa and since then have not been able to part from it". No wonder his girlfriends are kicking their heels. "It's just amazing, it has become like my girlfriend," he laughs.

Don't know about his girlfriends, but surely his filmmaker colleagues would be a happier lot to see Dino swinging it at the box-office, too.
-(SAMPURN)