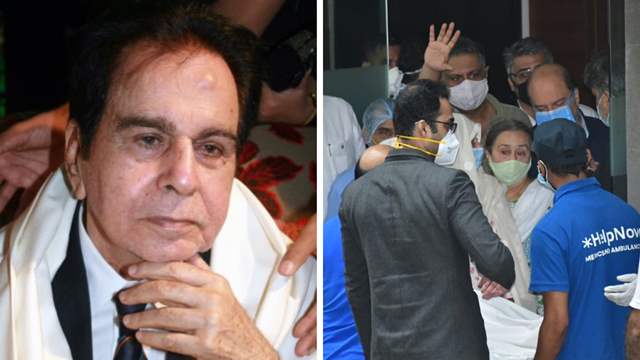 Veteran Bollywood actor Dilip Kumar, who had been doing rounds of the hospital in the last few months is no more. He left for heavenly abode at the age of 98, and his unfortunate demise was confirmed by Dr Jalil Parkar, the pulmonologist treating the actor at Mumbai's PD Hinduja Hospital.

Kumar’s family had been updating his fans about his health through his Twitter account and took to social media today to inform about his passing away. “With a heavy heart and profound grief, I announce the passing away of our beloved Dilip Saab, few minutes ago. We are from God and to Him we return," wrote family friend Faisal Farooqui in a tweet.

Dilip Kumar’s funeral will take place today in Mumbai and he will be laid to rest with full state honours. The information was shared through his official Twitter handle:

Earlier this week, the 98 year old was hospitalised following complaints of breathlessnes and was rushed to the intensive care unit (ICU). Previously, Dilip Kumar was admitted to Hinduja hospital on June 6 after he complained of breathlessness, and he was later diagnosed with bilateral pleural effusion, a build-up of excess fluid between the layers of the pleura outside the lungs. He underwent a successful pleural aspiration procedure, and was discharged after five days on June 11.

Dilip Kumar’s passing away has left the industry members and fellow actors bereaved, who are mourning the loss of the cinematic legend.

In a career spanning five decades, Dilip Kumar worked in more than 65 films and has been a part of many iconic films like Mughal-e-Azam, Devdas, Naya Daur and Ram Aur Shyam. His last big screen appearance was the 1998 film Qila.