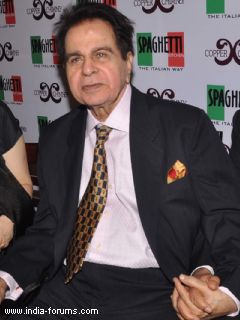 He might be an idol for many, but megastar Amitabh Bachchan says his idol is none other than thespian Dilip Kumar and wishe him good health and a long life on his 89th birthday Sunday.

'It is a celebration for the greatest, on the eve of his birthday. He will turn 89, the 11th of December. Exactly 20 years older to me by birth and exactly 2000 years ahead of me in our common vocation. He is my idol and has been since the day I first saw his work,' Amitabh wrote on his blog bigb.bigadda.com.

Called the greatest method actor of the Indian film industry, Yusuf Khan was introduced to the Hindi film industry by Devika Rani as Dilip Kumar with the 1944 movie 'Jwar Bhata'. Though his first film went unnoticed, he made a mark for himself with his natural style of acting in films like 'Amar', 'Madhumati', 'Devdas', 'Mela', 'Shaheed', 'Leader', 'Taraana', 'Daag', 'Naya Daur' and the magnum opus 'Mughal E Azam'.

'He has been an inspiration not just for me but I am certain to thousands of those that have ever dreamt of facing a camera for the art form called cinema. His presence, his aura and his dedication to film shall be documented as 'before Dilip Kumar and after Dilip Kumar'.

'On the eve of his birthday, I wish him good health and a long life of peace and happiness. His strength of delivery and his strength of connect with any character he portrayed has been unique and unsurpassable,' he further wrote.

The 69-year-old recalled how he used to break hostel rules to watch Dilip Kumar's films in cinema halls with the barest minimum facility and comfort.

'He was the one actor that we as young students in university broke boundaries and hostel rules to go see his films night after night. His early films had been historic in content and repute - 'Aan' and 'Shaheed' - ones that I still remember seeing in the darkness of cinema halls with the barest minimum facility and comfort,' he wrote.

'We would sit on wooden benches right up in front in the theatres and marvel at what our hero would enact. And among the many that we saw and enjoyed, it was for me always a Dilip Kumar that stood out. Different and distinguished. And always without fault.'

Amitabh worked with the legendary actor in 1982 hit movie 'Shakti' and remembering the film's shooting, he revealed that it was very difficult for him to stand in front of his idol and act.

'And then one day I stood along with him on the sands of Juhu as the camera rolled to give the mahurat shot for 'Shakti', the only film that we worked together in. Tough to stand in front of one whom you have admired for ages, and disagree with. There were electric moments between him and me in the script,' he wrote.

Bhumi Pednekar Reveals How she wants People to Remember her ...
5 hours ago