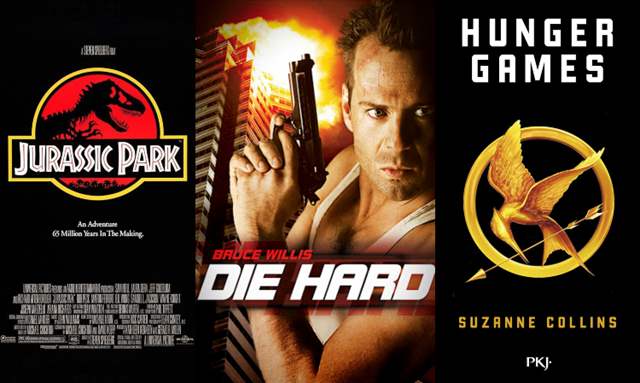 Against the contrary belief, that 'films based on Fictional books are a big let down', Action films based on books have always proven to be a good choice to look forward to. A good story combined with some impeccable action— can't go amiss.

Names like 'Die Hard', 'Jurrasic Park', 'Hunger Games', 'James Bond' and 'Bourne' are some of the appropriate examples of the above fact and well, so is Amazon Prime Video’s Without Remorse turning out. These classical films have been adopted by famous novels, which continue to entertain the audience even now.

Here are some reasons, why Action Films Based on Books Are A Good Choice -

1) All of the characters and the relationship amongst each other, in such movies, is well-defined and to the point.

Watching an action film that has been adapted from a book, not only comes at par with one's vivid imagination but also adds to it. The character backgrounds are much more developed and enhanced.

2) The heavy movement and exertion in an action film enriches the plotlines of the film and makes it compelling.

Most conventional films are dependent on the plotline, but with an action film, the scene changes. It's the action that defines the plot.

3) The supervision of the writer's on sets, provides for a great insight

Most of the film sets are being made under the writer's and the novelists' supervision. And many of them even stay during the entire filming scenario, to make sure that the films' story line aligns with the book, it has been adapted from.

The entire storyline of a power-packed action film is what one craves for. Dramatic sequences, with a well-established back story, make an action film based on a book more and more interesting.

One such film that is now all set to go on floors is 'Without Remorse', which is based on the 1993 novel penned by Tom Clancy. The action film will premiere on Amazon Prime Video on April 30, 2021. The film based on Tom Clancy's book that sees, Michael B Jordan's return as Agent Kelly, the film also boasts in the likes of Jamie Bell, Jodie Turner-Smith and Guy Pearce among others.

This is Amazon’s yet another adaptation of the famed author’s work, the novel that published in 1993, with the same title, for which the audience has been waiting with bated breath.

An action film based on the novel is an exciting spectacle, with compelling plotlines and over-the-top entertainment. All the previous action films which have been adapted from books are living proof of that.

29 days ago Jurassic Park is not an action film.