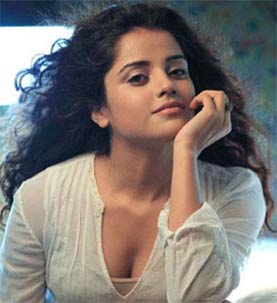 Southern actress Piaa Bajpai, who is awaiting the release of her debut independent project "X", says she did it for self-satisfaction and to prove herself as an artist.

"I'm aware indie films are made on limited budget, time and resources but I still consider them special because they give a lot of satisfaction to an actor. I did 'X' for that satisfying factor and I have been satisfied in the process," Piaa, known for southern films such as "Ko" and "Goa", told IANS.

"You do films either for money or name. I did 'X' for name, to carve my niche as a performer in the industry," she added.

The movie is about a filmmaker's journey through his past encounters with his 10 ex-girlfriends after he meets a mysterious girl who intriguingly seems to have something to do with every woman in his life.

Actor-director Rajat Kapoor plays the lead in "X", which will feature Piaa in the role of a 17-year-old school girl.

"I thoroughly enjoyed playing a school girl in the film. I didn't find it difficult playing a character younger than myself because I enjoyed playing my role. I wore a school uniform and even got to wear ribbon for my hair. I had a ball shooting for the film," she said.

The portion featuring Piaa in "X" is directed by Gaba, who is known for his heartwarming debut film "Shuttlecock Boys".

Piaa is more excited about the project because she feels it might even earn her international acclaim.

"I'm sure this film will be sent to several film festivals. If I'm lucky I may also travel to these places and earn some recognition. My parents will also watch this film and that makes it even more special for me," she added.

Shakuntala Devi's Director Reacts to the Reviews Pouring in for Vidya ...

Taapsee Pannu: Will ‘break all ties’ with Anurag Kashyap if ...
16 minutes ago

Bigg Boss 14: Kavita Kaushik shuns reports of being a part ...
35 minutes ago