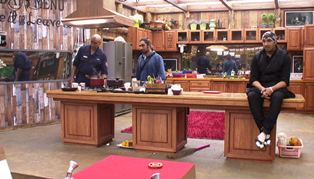 During the Museum task, Gautam lied to Diandra about his secret task. Instead of the truth Gautam told Diandra that they have been warned about their physical coziness with each other every now and then. When Diandra got to know about Gautam's lie, she confronted him.

Gautam apologized stating that he thought that it won't be a big deal as Diandra is a carefree girl. Diandra while speaking to Karishma about it gets really upset and said that she wants to show Gautam how carefree she can be.

Diandra then went and kissed Gautam in front of all the housemates. Gautam and Housemates are shocked and rooted to their grounds while Diandra just walks away.

Sunny Leone and Karishma Tanna in the action-packed original series - ...

6 years ago cheap woman,,, wants to be safe from elimination so trying to take d limelight