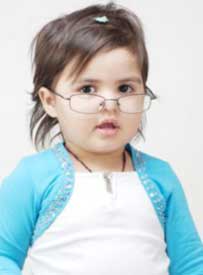 The little prodigy Dhriti Bhatia who brought waves with her acting at a very young age with Colors' Jai Shri Krishna and is also currently seen in Sahara One's Mata Ki Chowki is expected to be on board of Optymistix's Don't Worry Chachu on SAB TV.
Yes, you have heard it right, once again the cute little Dhriti will be back with her naughty gestures to amaze the audience. A source informs, "As Dont Worry Chachu is going to focus more on children, Dhriti was the channel's first choice to rope her in the show. Accordingly, the production house has considered her to essay one of the lead children. She will be essaying the character of the Princess in the house."
"Similarly, the casting for more child actors is on and the entire cast will get lock by 15th of this month. Till the time the promo shoot along with Asif Khan alone will be done, "adds source.
We contacted Gagan Bhatia, father of Dhriti and he confirmed the buzz, "Yes, the production house has approached Dhriti to essay a very pivotal role in the show and if things fall in place, she will be doing the show."
It would be a treat to SAB TV audience with Dhriti joining the cast…
Reporter and Author: Tejashree Bhopatkar

+ 4
9 years ago Telly buzz u ppl are still using 2 years old pics of dhriti ..plz use her latest pics...

9 years ago wow. she looks so cute in the picture. definitely a A+ actress in the making.

+ 4
9 years ago wow i am so happy for my dear Dhriti
my sweety coming in a new show
she has a huge fan following since JAI SHRI KRISHNA days ...i am so happy ..Dhritu dear love u so much

9 years ago awww bless her... she looks sooo adorable!!!

+ 2
9 years ago Shez really vry cute but doing so much work is nothng short of Exploitation at such Young Age...!!! Nyways God Bless This Sweetie-Pie..!!

9 years ago I hope she has a say in all she does...otherwise its almost child abuse...but she is cute as button

+ 5
9 years ago @ankita10 i soo soo agree with u .. she is such a sweety but working so much at such a young age.. its feels sort if exploitation

9 years ago she's such a sweetheart! truly brilliant:)