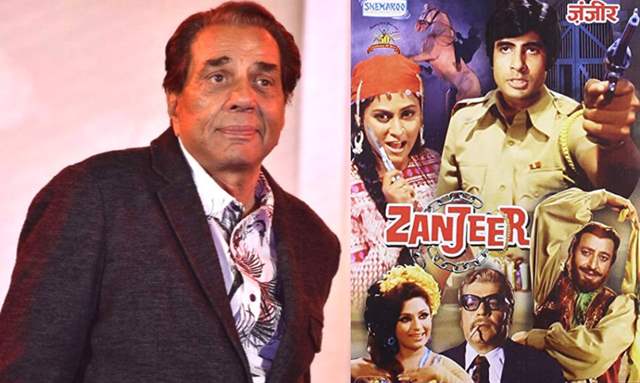 Veteran star Dharmendra is considered to be one of the most revered stars in Indian cinema. The actor has worked in several hit films in his career and he is quite upfront about his film career that has been followed by generations of people across the country. In a surprising turn of events, Dharmendra spilled a few unknown details about some of the hit films that were first offered to him, which include Anand and Zanjeer. He also revealed the reasons why he ended up rejecting these movies.

In an interaction with Bollywood Hungama, Dharmendra mentioned, Anand is not the only important film that the superstar-actor had to let go.

“You will be surprised to know that Prakash Mehra’s Zanjeer (which catapulted Amitabh Bachchan to fame) was my project. I was all set to do the film when I had to opt-out for personal reasons”, Dharmendra said in a recent interview.

Furthermore, he also mentioned, his aunt who had a run-in with Prakash Mehra told Dharamji he will work with Mehra over her dead body. “I’ve always allowed my heart to rule my head. Why only one Zanjeer? I’d let go of a hundred Zanjeers for emotional reasons,” Dharamji said.

Recalling the reason he had to let go, Dharmendra said, “Hrishida was a very close friend. We did a number of great films together Anupama, Satayakam, Guddi, Chupke Chupke. Satyakam was his favourite film and mine. On a flight to Bangalore, he narrated the story of Anand to me. I fell in love with it and agreed to do it. The next thing I heard was, another actor was doing it.

He continued, “I was so upset I called Hrishida the entire night after downing a few pegs insisting Anand was mine. Of course, Hrishida did the film with the actor he thought best for the role. No hard feelings. I miss Hrishida. He was a great filmmaker and great fun to be with."

Dharmendra on Shashikala's demise: She Played Bad Women But Was An ...