Dhani (Barkha Bisht) who has now taken over the character of a lady dacoit after joining hands with Ambika Bhavani (Varun Khandelwal) in Star Plus' Sajan Ghar Jaana Hai will soon be seen portraying her physical strengths with weapons too. 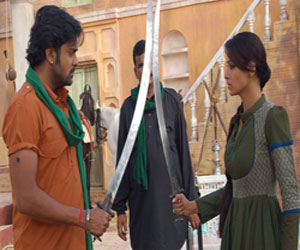 According to our source, "The creative team has recently shot for a sword fight sequence wherein Ambika is preparing Dhani ( Barkha) for physical encounters, wherein he is teaching her the skills to use swords".

Watching heroes doing fight sequence is fun but when the scene turns on oneself in personal life, fun turns into a thriller. And this is exactly what happened to Varun and Barkha as they had to learn a bit of sword fighting to get the scene right.

On this note Varun asserted, "Experience was fantastic yet scary as Barkha used to lose her concentration at times, due to the strong heat. She even ended up hurting our trainer. But as I have learned Marshal Arts in school, and have been a huge Jackie Chan fan I enjoyed it a lot."

Even when a person is pursuing his/her passion yet practice is a must. "In television, scenes are very time bound, and we were informed about the shot a day prior to the shoot. The next day we were taught a sequence of 9 moves; we practiced it with the trainer thrice and then gave the shot impromptu and luckily that turned out to be good", added Varun.

When asked Varun as to how did they manage to handle the heavy swords in the scorching heat he asserted, "Even though our training is not real, our swords are. Our creative team has been generous in getting us the Ninja Swords which are the most lightest in weight, so they are quite manageable."

A-HELPING-HAND 10 years ago IS THE SHOW'S NAME IS SAJAN GHAR JANA HAI?
UNBELEIVABLE
THE SHOW IS VERY BORING

Stellar.A 10 years ago i lyk this track...sgjn seems to have taken a 360 degree turn!