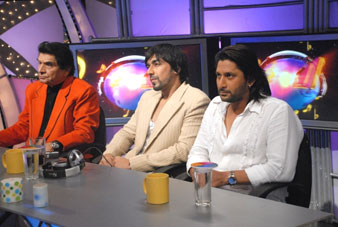 This week SRGMP is heading towards a fun filled episode. Friday being the elimination day everyone waits with baited breath for the results. But this Friday, the theme being Comedy Songs, there’s a lot of fun on the sets too. To promote the movie “Dhamaal” and to add to the comedy atmosphere around the sets, renowned comedian actor Asrani along with actor Ashish Chaudhuri join the contestants. To everyone’s surprise, Arshad Warsi also walked down to the sets of SRGMP. These three then make sure to create a real “Dhamaal” on the sets, sending everyone into a laughter riot with their non stop jokes. 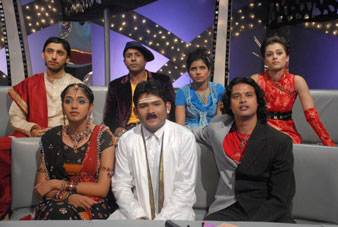 It would be Raja who is going to steal everyone’s eye by singing the song of Kishore Kumar “Aa ke Sheedi Lagi dil pe jaise katariya..o sanwaria”. He would be coming on to the stage in male and female attire and sing the song in both the voices. Raja would be more overwhelmed when he comes to know that Shankar, Ehsaan & Loy have signed him for their next movie. Even Aneek and Sumedha are going to give brilliant never seen before performances.

Himesh Rashamiya will be on cloud nine as this week, both contestants of his Rock Gharana find their position among top three - Aneek becomes the titan of the week by regaining his top position and Mussarat takes the third. Raja is few votes short of Aneek and makes to second position. Also get prepared for a very surprising elimination!! 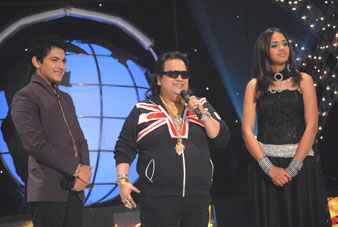 Saturday, the contestants sing songs of their favourite actors. Aneek maintains the same genre chooses another Sonu Nigam song. He sings the title song of “Kal Ho Na Ho”. Sumedha comes up with Jadoo hai nasha hai while Mussarat makes sure to entertain with the song “dulhe ka sehra”. Raja is not far behind and retains the musical treat provided by other participants by singing “Pardesi Jaana Nahin”. Aneek and Amanat find themselves in a hilarious but embarrassing situation when both sing romantic songs. Their mentors Himesh and Ismal Durbar make sure to cash on the love triangle issue again. There were some surprise visitors for Musarrat on the sets. Lot of fans of his had come from Kolkata, just to watch his performance. Bappida also makes an announcement in the show that Pritamji has called him to sign Mauli for his forthcoming movie.

To know more on what is the surprise package, what will be the reactions of the mentors on the elimination, who excels the other in the performance, watch Hero Honda SaReGaMaPa on Friday and Saturday, 7th-8th Sept. at 10 PM IST only on Zee TV.

**sanya** 14 years ago omg watever happened 2 mauli was jst sad
i mean she was the bst singer man am not sayin sumedha werent but mauli was hud n watver append 2 her was jst unfair.
junaid was gud aswell i really wanned junaid n mauli 2 win but wat an earth they bof wen out

14 years ago Do they want Mauli for singing the songs or for acting? This couldn't come across, please someone explain. Thanks for the article, very well written.

+ 2
14 years ago is mauli returning back as that is shown in the second snap and from where ARSHAD came in today's episode ARSHAD was not shown na????

14 years ago hehe...aneek lukin so funny...
thnx fr the article

14 years ago How come Muali is there in 2 kinds of dresses? Does that mean that the last snap is from Saturday? Does that mean she is still in? Or is it that she just brings back the 'walked out' Bappi'da back to the sets

The Staurday write-up talks about Aneek, Sumedha, Musarrat... What are Amaanat, Poonam (and Mauli, if they have staleld her elimination again) singing in that case?