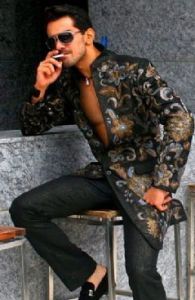 The current track of Star One's Geet Hui Sabse Parayi has raised the curtain on Dev's sins, which has left him behind bars. However, the interference of Maan's granny has got him out of jail as of now, creating further problems in the life of Maan (Gurmeet Choudhary) and Geet (Drashti Dhami). Apparently, Abhinav Shukla who essays Dev is in a happy mood and is rejoicing after landing in jail.

Wondering why an actor would love to be shown behind bars? Well, Abhinav who is an adventurous guy in real sense had planned a huge holiday as Dev was supposed to make an exit from the frame for sometime.

A very excited Abhinav says, "Dev was in jail, so there were only few scenes to shoot and I was to be left with plenty of time. Therefore, I planned to go to Junnar, to have a great time amidst leopards. I am excited and looking forward to this trip".

"Not only Junnar, but I will go to Goa for a bike ride after that. Then I plan to go to Kerala too. I am now waiting for a final confirmation from the production, and hope that I will not be required to shoot for few days. Once I get the green signal, I will leave for my holidays", adds Abhinav hopefully.

We too hope Dev remains in jail for a while so that Maan and Geet get time to sort out their differences!!

+ 2
7 years ago Drashti Dhami...You are the Best...can't wait to see your performance in JDJ...keep rocking...

May ganesh ji bless u wid lots f luv,success ,happiness n protect u from all evil eyes n bad mouthing people...
N really praying my gannubhaiya to fulfill our wish by making u d winner today...n I trust him dat he will surely listen to my n all others prayers...

8 years ago drashti you are very very gorgeous. i love you angel. please come back for your fans. we all are desperately waiting for your new show. you are my rock star.

8 years ago drashti you are very very beautiful. love you angel. you are wonderful actress. i am waiting for your great venture. you are my rock star. god bless you.