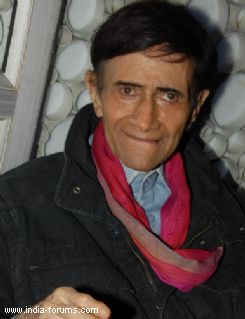 Evergreen star Dev Anand's ashes were immersed in the Godavari river in Nashik Wednesday evening by his son Suneil, a family friend said.

'Suniel just finished immersing the ashes of his father in the holy waters of the Godavari river. I accompanied him there,' Mohan Churiwala, a close associate and family friend told IANS over the phone.

'Also accompanying Suniel was former Maharashtra's director general of police Ajit Parasnis, who was a close friend of Dev Sahab and his family,' Churiwala added.

A memorial service for Dev Anand, who passed away following a cardiac arrest in London last week will be held at the famous Mehboob Studio here Friday.

'Condolence prayer meeting for Dev Anand will be held on Friday between 5 p.m. to 7 p.m. at the Mehboob Studio in Bandra,' Churiwala said.

The meet is expected to be attended by the who's who of the Hindi film industry, for which the actor will always be alive like a guiding star.

Dev Anand who dedicated 65 years of his life to cinema and acted in more than 110 movies, died in London Dec 3. He was 88.

He was cremated in London Saturday, close friends and family members were present at the Putney Vale electric crematorium for his last rites.

The memorial service is being organised at the Mehboob Studio for a special reason.

'It is being organised there because of the sentimental reasons. The studio has his personal make-up room and which has been kept just like that. It still has his costumes, his make-up kit, etc,' Churiwala had earlier told IANS.

Ranveer Singh wishes the ‘OG’ Kapil Dev on his birthday with a sweet ...

Sahil Anand opens up on thriller series, 'The Missing Chapter'

"Dev is a very intriguing character who plays a pivotal role in ...