Anil Devgan's 'Haal-e-Dil' is releasing Friday and might face competition from 'De Taali' and 'Khushboo' as they are also opening the same day, but he is not perturbed.

'A few days back, I met E. Niwas for the first time when we were working on the same studio for our films. I wished him all success for his film and he also wished me the same,' Anil told IANS. 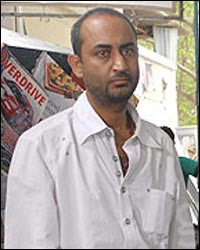 'Though I have not met Nihalani, my best wishes are with him as well,' added Anil who earlier directed films like 'Raju Chacha' and 'Blackmail' with Ajay.

Is Anil scared that 'Khushboo', which is of the same genre, might take away the audience from his film?

'Every film is unique and the better one will survive. But, I wish that all the three films do well.'

You sound so humble?

'I'm not that type of a person who thinks badly for others. If good can happen to all of us than why not we wish for it,' said the director.

While Anil is wishing success to his competitors, producer-director Harry Baweja is miffed with Aamir Khan for releasing his nephew Imran's 'Jaane Tu... Ya Jaane' Na' with his son's 'Love Story 2050' July 4.

Anil's earlier film 'Raju Chacha' and 'Blackmail' were not successful at box office. Does that frighten him?

' 'Raju Chacha' was a not a flop because it could garner a lot of money. Since it was made on a big budget of over Rs.300 million which was quite a huge amount nine years back, the expectations were high.'

And as far as 'Blackmail' is concerned, 'It was delayed by three-and-a-half-year so the thought and the novelty of the film were lost. Every thought and every subject has its own life and so the idea behind the film was lost because of its delay in release.'