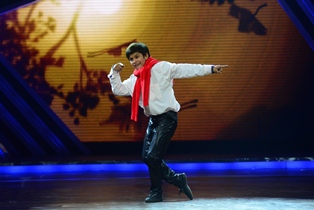 It was an evening filled with scintillating performances as the charming Sonam Kapoor and the talented Ayushman Khurana made an appearance on Boogie Woogie Kids Championship.

The special episode dedicated to the famous personalities of Bollywood saw Sagar perform as Thakur (Sholay) which received immense appreciation by the audiences and a standing ovation from the judges. Additionally, Mumtaz's Joker performance from the Raj Kapoor movie on the song Aye Khuda compelled the judges to give another standing ovation. Ayushman was so moved by his performance that he appreciated him in his own shayari style.

This is not all! Amazed by Sachin's stunt filled performance, Sonam delightfully said, "Boogie Woogie has the best standard amongst all shows."

Gauahargeous_N 9 years ago dont know y ppl r hating on this pic... sonam looks nice! she pulls off the red lipstick the best!

Aanya. 9 years ago Sonam is really beautiful but this picture makes her look weird... =)

sweet_angel27 9 years ago She's gorgeous, but this look is just not for her.

..KaJenDelena.. 9 years ago Sorry but she looks like a tramp. Argh Fishnets! enough said.