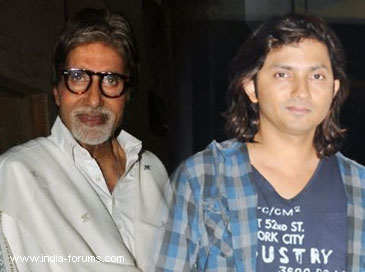 Filmmaker Shirish Kunder blames himself for the delay in his project "Common Man", a film that he plans to make with megastar Amitabh Bachchan.

"About 'Common Man', the delay in starting it has been completely my fault. As a producer, I failed to put things together. Working towards it," tweeted Kunder.

The news that Big B will be a part of the movie was announced in December last year. Kunder had said that he waited for six years for the right script to approach the megastar.

The editor-turned-director, who is married to choreographer-filmmaker Farah Khan, also has other projects like "Joker" and "Kick" in the pipeline.

Kailash Kher's mixed feelings in the US

Singer Kailash Kher, who is busy touring US and staging performances, says it's a different feeling to see the love for Bollywood among NRIs.

"Its a mix feelings in America, how desi people are so religious about Indian films n filmi people like actors etc, God you are too much (sic)," Kher tweeted.

Recently, the "Saiyyaan" singer also performed for the first time in Pakistan.

Amitabh Bachchan will once again be styled by designer Rohit Bal for the next season of reality show "Kaun Banega Crorepati", and the 69-year-old megastar is mighty excited about it.

"The designing of the look on KBC by Rohit 'Gudda' Bal... just lifts your spirits when you wear his outfits... that jacket... hmmm," Big B posted on Twitter.

Amitabh has already started working for the sixth season of the popular show, which will be aired on Sony. In the last season, the show focussed on the common man, and Big B was seen wearing chic suits and jackets by Bal.