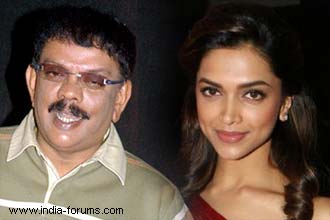 Actress Deepika Padukone and filmmaker Priyadarshan had a noisy fallout five years ago when she opted out of his project "Pirates", but the two have patched up now and have agreed to work together.

Priyadarshan was keen to launch Deepika and the film was supposed to feature her with four other newcomers playing a music band. Instead Deepika chose to make her debut with Farah Khan's "Om Shanti Om".

After that Priyadarshan stayed away from Deepika until 2008 when Shah Rukh Khan used his clout to persuade Deepika to perform an item song in Priyadarshan's "Billu", which SRK's Red Chillies Entertainment had produced. The thawing of the ice had begun.

Now it's time for the director and actress to finally work together.

"We broke the ice during the song in 'Billu'. Now I've a role just right for her," said Priyan.

Priyadarshan, who has directed about 83 films in his 30-year career, had no releases in 2011, but he's ready to make up for the lost year with as many as four films this year.

Of these, the 'family comedy' (as he dubs it) which he will direct in July for Shree Ashtavinayak Cine Vision Limited has him specially kicked. Not only is he working with Abhishek Bachchan for the first time, he has also reached out to Deepika for the female lead opposite the actor. It's a double delight for Priyadarshan since he has never worked with both the actors.

"Abhishek and I have been planning projects together for the longest time. We were supposed to do a bio-pic on Chandrashekhar Azad. But who watches historicals any more? I've finally zeroed in on the perfect project for Abhishek. We start shooting in July," said Priyadarshan.