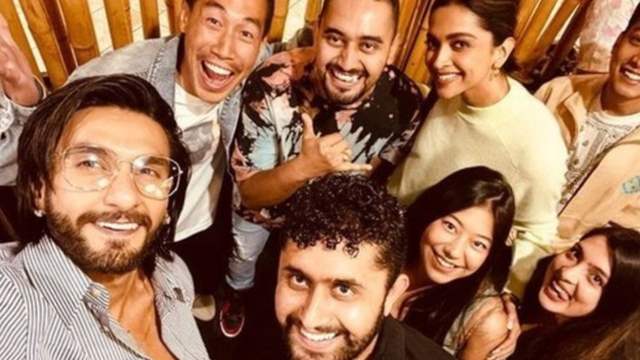 Bollywood's power couple Deepika Padukone and Ranveer Singh are getting some much-needed private time. Ahead of Ranveer's birthday, the duo, who have taken a break from their demanding work schedule are enjoying their US vacation.

Deepika and Ranveer have made many public appearances in San Jose, California, prior to the birthday celebrations and  fans have been going gaga over the couple's images and videos on social media

Recently Deepika and Ranveer went to the Konkani Sammelan in San Jose since the actress had been invited as the principal guest. Renowned musician Shankar Mahadevan also made a performance at the same NRI conference, where Deepika, Ranveer, and her family were seen enjoying the same. It is evident that the couple had a blast at the event.

Well, now their latest pictures will definitely make some of their fans jealous as few of the lucky ones managed to meet the stars. Yes you read it right!

The couple went to a well-known Asian restaurant called Benihana and indulged in some Japanese cuisine. Naturally, Deepika and Ranveer were swarmed by admirers who wanted to take a photo with them. The duo gave delighted their fans as Ranveer himself clicked the selfie. Well must say that the 83 actor surely clicks the best pictures.

Deepika will soon begin shooting for Fighter where she will be seen sharing screen space with Hrithik Roshan for the first time. She will also be seen in Pathaan alongside Shah Rukh Khan and John Abraham. Meanwhile, Ranveer has been shooting for Rocky Aur Rani Ki Prem Kahani and met his co-star Alia Bhatt in London briefly before heading out to meet his wifey in the US.

+ 8
3 months ago i would like to see them just naturally one day...it seems like they always know the cameras as around